Note:  The Jets improved to 2-0-1 thanks to last night’s 4-1 win over the Canucks as they hit the mid way point of this six-game home stand.  Today they are scheduled to practice at 12 noon and the Jets Practice Report will bring you up to speed.  Stay tuned.

Note II:  The Moose say goodbye to a long week of practice and hello to a gameday as they will face the Rampage tonight and Sunday afternoon.  Morning skate is at 10 am with puck drop at 7 pm.  I will be there covering the game as per usual and will have more following same on here.

Winnipeg Sun: Jets turn page on collapse in 4-1 win against Canucks. Plenty to digest from last night’s Jets victory that is just want Ken does with his recap. 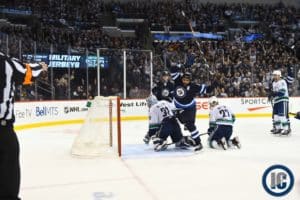 The Province: Winnipeg’s top guns crank up speed to power past young road warriors. Read about the game from the perspective of a beat writer that covers Vancouver.

Vancouver Sun:  Good teams like the Jets teach lessons.  Important to be able to lock down a victory and that’s what the Jets did last night.

Global News: Byfuglien with 3 points in return to lineup. Russ breaks down the action.

TSN: Little finding his footing with new line.  Despite Winnipeg’s win over Vancouver, TSN Scout Craig Button says that the Jets haven’t found their stride just yet, but players like Bryan Little are adjusting great with their new roles on the team.