Note:  If you turned the TV off after 40 minutes with the Jets leading 4-1 you were probably a happy camper but hockey games are 60 minutes (or more).  The Oilers scored two quick goals to open the final frame and then tied it up late in the 3rd to force OT which they ultimately won.  It was the Connor McDavid show as the Edmonton phenom was dominant throughout the contest impacting all four Oiler regulation goals.  The Jets are scheduled to practice today at 12 noon at Bell MTS Place.

Note II:  The week of practice in preparation for the next double header continues for the Moose today as they are scheduled to hit the ice at 10 am for a practice at Bell MTS IcePlex.

Note III:  Tune into NHL This Week tonight at 7 pm as the guys take a look at what is happening around the NHL.

Winnipeg Sun: McDavid sets an NHL record in Oilers victory over the Jets.  He was sensational. 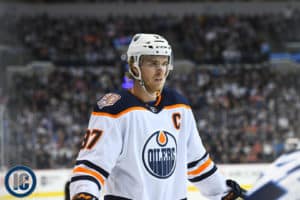 Winnipeg Sun: McDavid does it all for Oilers in win over Jets.  If not for him that game was over.

Winnipeg Free Press:  McDavid mesmerizes Jets in 5-4 OT win.  (Paywall).  It wasn’t just the Jets who were mesmerized by the play of the most dynamic player we’ve seen at Bell MTS Place since the franchise returned to Winnipeg.

Winnipeg Free Press: Puck luck aside, Ehlers doing right things around net. (Paywall). In case you were worried the Dynamic Dane moniker wouldn’t still apply give this article a read.

TSN: McDavid’s record night could be Oilers’ turning point. What a joy he is to watch play the game.

Sportsnet:  Scheifele weighs in on Matthews vs McDavid.  I’m not really sure why we have these conversations at essentially the start of these guys careers or even if you feel that sufficient time has played out to begin the conversation, why this conversation is happening less than 10 games into a season?