TSN:  Schremp to play for Modo.  We here at IC are big fans of Schremp who used to provide IC with some inside perspective on life in the NHL.  We wish him well in Sweden.

Winnipeg Free Press:  Bogo contract talk.   Of the 3 big names yet to sign with their respective teams, Bogosian is the most raw but still has tremendous upside for the Jets.

Winnipeg Sun:  Dream come true for Manitoba NHLers.  There are a number of players born in Manitoba who will be pumped to be back home playing in a regular season game against a team they might have grown up cheering for.

Winnipeg Sun:  Bogosian ready to bring it on with Jets.  Nice to finally hear from this young defensive stud.  You have to get excited at the prospect of seeing him suit up for Winnipeg.  Interesting to read that he has already rented a condo in Winnipeg.

St. Louis Dispatch:  Prospective Blues buyers get deadline to submit bids.  10 groups interested in purchasing the Blues although it appears that once again, Matthew Hulsizer’s interest in owning an NHL team might be fleeting. Guess this means Blues fans won’t be subjected to MH in a St. Louis jersey cheering. 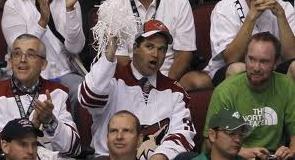 More from ‘Around the NHL’ including Ducks extending Carlyle, hockey guru to the stars and Rangers 1st round pick chooses OHL over college after the jump.