Note:  The Jets face the Predators tonight in Nashville with an 11:30 AM morning skate and a 7 PM puck drop.  Obviously this is the first time since Winnipeg eliminated them in game 7 during the second round of last season’s playoffs that these two teams will meet and it should prove to be quite the battle.  Check out the latest from morning skate to get read for tonight’s game.  Keep it locked to illegalcurve.com and on social media including Twitter| Facebook | Instagram for all the latest pre and post game news.

Note II:  The Moose continue their practice routine this week as they prepare for their home opener here in Winnipeg on Friday against the Belleville Senators.  The team announced that Peter Stoykewych will be the new captain of the squad and JC Lipon and Cameron Schilling will serve as his alternates.

Winnipeg Sun: Perreault takes reduced role in stride.  Perreault has always come across as the ideal teammate, one who cares about the team winning. 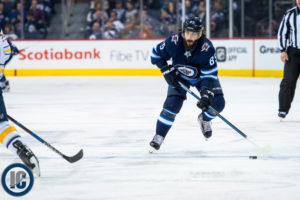 Winnipeg Sun: Jets top priority? Get second line going.  The lack of production from the second line seems to be the biggest issue surrounding the Jets right now as they try to get these three talented players all on the same page.

Winnipeg Sun: Five keys to Jets vs Predators. Ken’s big matchup is Mark Scheifele vs Ryan Johansen. His five keys include: 1) Red-hot Connor. 2) Keeping it tight. 3) Start on time. 4) Offence from the defence. 5) The goalie battle.

Winnipeg Free Press: Yes, it’s just October, but c’mon… it’s Jets-Preds. (Paywall).  Gotta agree with Mike that this is a must watch game already even though the season is so young.

Winnipeg Free Press: Scheifele looking forward to Music City return. (Paywall).  Considering how the second round of the playoffs went for #55 his excitement makes sense.

Winnipeg Free Press: Perreault’s points not as pivotal as his leadership. (Paywall).  With the offensive players on this team they can afford to have his contributions come in different ways.