Note:  The Jets beat the LA Kings last night 2-1 to improve to a 2-1 record.  They are scheduled to practice today at Bell MTS Place at 12 noon before the team departs for Nashville.  They will take on the Predators on Thursday night (Puck drop 7 pm CT).

Note II:  The Moose continue their practice routine this week as they prepare for their home opener here in Winnipeg on Friday against the Belleville Senators.

Note III:  Tune in for NHL This Week with Illegal Curve Hockey tonight at 7 pm on TSN 1290 Winnipeg for two hours of hockey talk. 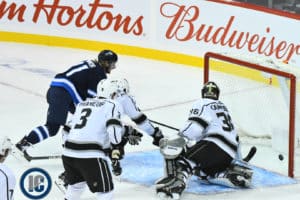 Winnipeg Sun:  Far from pretty, but Jets get the job done in home opener.  In April folks won’t recall how the Jets won this game but will focus instead on the two points they added to the standings bank.

Winnipeg Free Press: Jets avoid sin bin in 2-1 win over Kings. (Paywall).  One of the words discussed on Tuesday morning was discipline and the Jets did a good job avoiding needless penalties.

Winnipeg Free Press: Jets coach mulling elimination of morning skates. (Paywall).  Seems to be the way the league is moving towards.

Winnipeg Free Press: Top Jets line’s shot-attempt differential? Don’t worry about it. (Paywall).  It is like doing Power Rankings after a week of NHL action.  Just seems a smidge premature which Andrew acknowledges.

L.A. Times: Jets power past the Kings; completely outplay them in the second period. Read about the game from the perspective of a writer who covers Los Angeles.

TSN: ‘No hurry’ in Laine’s contract discussions. TSN Hockey Insiders Bob McKenzie, Darren Dreger and Pierre LeBrun discuss the newest OHL prospect that is trending towards exceptional status, the Hurricanes and Penguins’ goaltending situations, the latest on Tom Wilson and Austin Watson’s suspension appeals, and the big deal that no one seems to be talking about, Patrik Laine’s contract situation.

Sportnet: Connor and Ehlers progression key to Jets success.  Damien Cox explains how Paul Maurice would like to see his young stars further develop as well as key roles Ehlers and Connor will need to play for the Jets to meet and exceed high expectations.