Note:  The Jets had the day off on Sunday but are back in business today with an 11 am practice at the IcePlex as they prepare for the home opener tomorrow night against the Kings.

Note II:   The Moose were looking for revenge after Iowa took the season opener on Friday by a score of 4-1 but instead Manitoba was walloped on Sunday in the re-match 8-1 in Iowa.  That puts them at 0-2 to start the season with just two goals for and 12 goals against.  This Moose team looks like a squad that didn’t play any pre-season games.   They have the day off today before resuming practice tomorrow as they prepare for the home opener on Friday.

Winnipeg Sun: Season-opening split won’t tell much of the tale. After just two games it is not time to hit the panic button writes Ken.

Winnipeg Free Press:   Jets’ penalty killing needs work.  (Paywall).  There were certainly question marks surround this avenue of special teams heading into the season and after Saturday’s game those questions remain.  And maybe in the interim they should stay out of the sin bin. 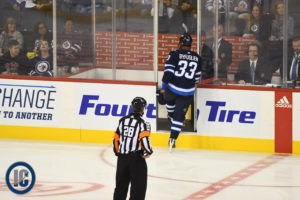