Note II:  The Jets were scheduled to practice today but have cancelled it.  You can read a full report from yesterday’s training camp.

Winnipeg Free Press:  Jets getting back up to game pace.  (Paywall).  With camp cut down to a more manageable size it is time for the squad to ramp things up.

Winnipeg Sun:  Maurice might alter Jets’ defensive pairings for road games.  With some time to go before the season gets underway and a healthy group Jets Head Coach Paul Maurice is still getting an opportunity to flip and flop his pairings.

NBC Sports: Simplicity, consistency key for one of the NHL’s most unheralded lines.  Scott Billeck looks at what makes the Copp, Lowry and Tanev line so successful. 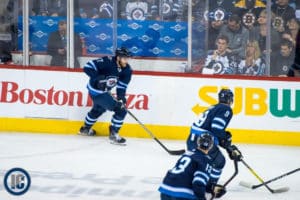 The Athletic Winnipeg: Saturday hot takes, travel notebook, and the importance of taking your best shot. (Paywall).  Murat covers an array of topics in this post for The Athletic.

Topics: Jets finish their preseason schedule/make cuts to opening night roster, Projecting the Jets forward lines to start the season, The Tyler Myers Left Side Experiment, Corey Perry’s injury and its impact on the Anaheim Ducks.