Note:  The Jets managed to salvage an OT win last night coming back late in the game to tie it and then winning it on a nifty play between Blake Wheeler and Dustin Byfuglien.  Special night for Winnipegger Peter Stoykewych who played in his first ever NHL game.  The team is off of the ice today but then back in action tomorrow night against the Oilers here in Winnipeg.

Note II:  Tune in today for three hours of Winnipeg Jets and NHL hockey talk on the Illegal Curve Hockey Show on TSN 1290 Winnipeg starting at 9 am.

Winnipeg Free Press: Lacklustre Jets edge Flames’ B-team. (Paywall). It certainly looked like a sleepy night for the Jets vets who really didn’t wake up until the 3rd period. 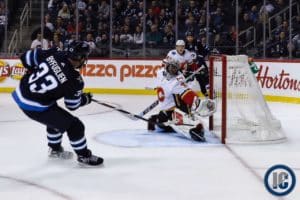 Winnipeg Free Press: Dustin Byfuglien brings regular-season enthusiasm to pre-season grind. (Paywall). The Jets big man clearly just wants to jump right into games that matter although he certainly had an impact on one that didn’t last night.

Winnipeg Sun:  Jets Snapshots.  Includes: 1) Griffith trying to carve out role with Jets. 2) Wheeler puts soft hands on display. 3) Hellebuyck knows what he needs to work on. 4)  Comfortable on off-side.

Sportsnet: Preseason is all about ironing out the kinks for the Jets. For Maurice, Scheifele, Laine and Byfuglien preseason is a great time to evaluate, work on new approaches and get in game shape.