Note:  The Jets were defeated 7-3 by the Oilers in Edmonton last night but no time to dwell on the loss as they will face the Flames tonight here in Winnipeg.  Puck drop is at 7 pm at Bell MTS Place. 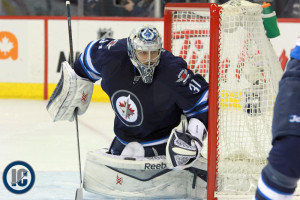 Winnipeg Sun: Shoulder injury in the past as Jets D prospect Nelson Nogier ready to battle.  After getting into 10 NHL games two seasons ago he was set back after being injured in the first pre-season game for the Moose last season.  But he has worked very hard to put himself back into a position to get noticed by the big club.

Winnipeg Free Press:  Oilers’ vets too much for young Jets.  (Paywall).  There was a pretty clear disparity between the veteran heavy Oilers and prospect Jets squad.

Winnipeg Free Press: Morrissey relishes playing against McDavid. (Paywall).  Talk about being thrown into the deep end of the pool.

Winnipeg Free Press: Dump & Chase – Warm up with the Winnipeg Jets soundtrack. (Paywall).  The guys are back at it for another fun episode and they look at a number of topics including: 1) A brand new Jets pre-game playlist. 2) Hellebuyck’s new lid. 3) Jets third jersey. 4) Tom Hanks Jets fandom. 5) Perreault’s golf game. 6) Hendricks vs Brossoit. 7) Lemieux’s fight.

Winnipeg Free Press: Marko Dano puts on brave face in audition for regular Jets role. (Paywall).  Couple of goals already for the slimmed down forward as he continues to make a case for a role with the squad this season.

TSN: Despite poor result, Roslovic and Lemieux impressive for Jets.  Playing mostly young players, the Jets were beat handily by the Oilers, as Connor McDavid, Ryan Nugent-Hopkins and Ty Rattie combined for five goals and 11 points. Despite the poor result, youngsters Jack Roslovic and Brendan Lemieux were impressive and have given themselves a good chance to stay full-time with Winnipeg. Kevin Sawyer and Dennis Beyak have more.