Note:  The Jets have cut their training camp roster down to 49 players after they re-assigned three players back to their junior clubs on Tuesday.

Winnipeg Sun: ‘Frenchie’ the father at home, and with Jets.  His versatility and never quit attitude can certainly be a fine example for any younger player. 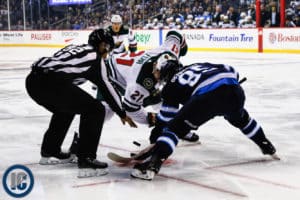 Winnipeg Sun: Wildcard line worth a longer look.  The Jets third line will be an interesting one as the season progresses.

Winnipeg Sun: Paul’s Notebook. Includes – 1) Stanley sees writing on the wall, but hopes to defy it. 2) Niku bulks up in hopes of sticking. 3) Jets send three back to junior.

Winnipeg Free Press: At home and work, Perreault tasked with looking after youngsters. (Paywall).  Hard to think of a better player to rely upon.

Winnipeg Free Press: Stanley a step faster following off-season training regimen. (Paywall).  It is important to take the advice of the team seriously over the summer and it sounds like the tall defenceman did just that.

TSN 1290 Winnipeg: Brossoit’s strengths lie in movement and athleticism. Jets goalie Laurent Brossoit joined Rick Ralph and Darrin Bauming on the Afternoon Ride. They discussed his win in the Jets preseason opener vs. Minnesota, nerves associated with playing in the game, the best type of saves to make, his initial impressions of his new team, his relationship with Connor Hellebuyck, goaltending style and summer training.