Note II:  The Jets prospects played their final game of the Young Stars tournament yesterday in Penticton.  They dropped the second game of this tournament where they finished 0-2 after another loss to the Canucks prospects.

Winnipeg Free Press:  D-man Nogier looking to break through.  (Paywall).  Last season was a difficult one for the Saskatchewan product and he is looking to bounce back and get back into a spot where he will be seen as a top D prospect for this organization. 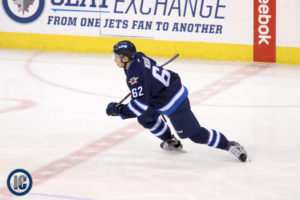 Topics: Thoughts on Blake Wheeler signing a five-year contract extension, The Jets salary cap situation going forward after the Wheeler contract extension, Patrik Laine says he has dropped 14 pounds and the expectations for him going into his third NHL season, Eric Comrie signs a one year deal and the battle for the Jets backup job