Note II:  The Young Stars tournament got underway yesterday in Penticton and the Jets prospects were tuned up by the Canucks prospects by a final score of 8-2.  Michael Spacek and Jansen Harkins who played with the Moose last season both finished with a goal and an assist.

Note III:  Three hours of hockey talk on today’s Illegal Curve Hockey Show on TSN 1290 Winnipeg starting at 9 am.  Join us as we talk about the Winnipeg Jets and the NHL.

Winnipeg Free Press: Jets prospect Lemieux focuses on his game. (Paywall). This will be a big season for the truculent forward. 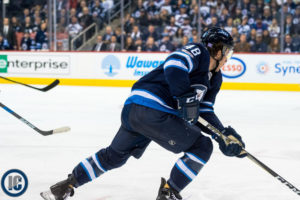 Sportsnet: Mark Scheifele challenges Jets to ‘get to that next level’.  With him driving the bus I suspect complacency will not be an issue for this Jets squad this season.