Note:  The Jets still have to sign the following RFAs including Joshua Morrissey, Eric Comrie and JC Lipon.

Winnipeg Free Press:  Trouba not writing off long-term deal to stay in city.  (Paywall).  The Michigan native was playing a charity game and spoke about his contract situation and the Jets ‘unfinished business’. 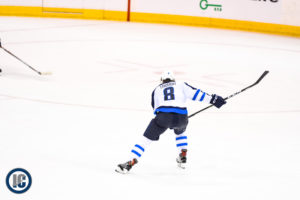 GQ Magazine: The real-life diet of Mark Scheifele, who brought Tom Brady’s nutrition philosophy to the NHL.  An interesting look at how the Jets top centre approaches an aspect of the game that not a lot of people think about.

TSN:  Trouba on arbitration decision: ‘I’m fine with it’.  Jets’ d-man Jacob Trouba spoke after the Stars and Stripes Showdown about the upcoming season, and how he feels the Jets have more to give after a disappointing end to a big playoff run, as well as his new contract, the second one he’s signed out of arbitration.

TSN 1290 Winnipeg:  Vesalainen will battle for a roster spot.  Winnipeg Jets play-by-play voice Paul Edmonds joined Andrew Paterson and Rick Ralph on the Afternoon Ride. They discussed Kristian Vesalainen’s entry level contract with the Winnipeg Jets, what the plan is for him this season, negotiations with RFA Josh Morrissey, the final year of Blake Wheeler’s contract and if there is a spot for Sami Niku on the roster.