Note:  After we detailed the players that were saying goodbye to the Jets and Moose next season the organization got an infusion of players on Tuesday after the Jets announced they had signed 2017 7th rounder Skylar McKenzie to a three-year ELC and then the Moose announced that they had signed seven players.

Winnipeg Free Press:  Laine distracts kids upset by unruly drunk on flight from Spain to Helsinki.  (Paywall).  Usually he is scoring but on this flight he was giving the airline a big assist with their passengers.  He certainly knows how to make kids happy. 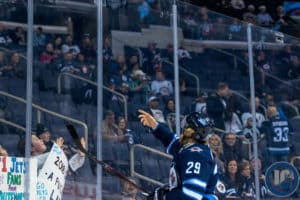 Fox 13 News: First Bay Area teen drafted by NHL team.  Sure sounds like the Tampa organization is having quite the impact on the community.  More on the Jets 3rd rounder from this past draft in Dallas.

TSN 1290 Winnipeg:  Jets will have to shuffle the lines following Stastny departure.  Murat Ates of The Athletic joined Andrew Paterson and Rick Ralph on the Afternoon Ride. They discussed Paul Stastny choosing to sign with Vegas over Winnipeg, how this year’s Jets team will compare to last year’s, possible line combinations without Stastny, if Jack Roslovic can play between Ehlers/Laine this season and what the Armia/Mason trade means for the Jets salary cap situation.