The Athletic Winnipeg: Kevin Cheveldayoff will have to draw on his Chicago experience to solve Winnipeg’s looming cap problems. (Paywall).  Murat suggests the Jets should continue their trend towards the Hawks model as they continue to pursue Lord Stanley’s mug. 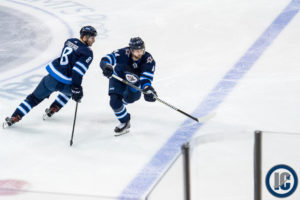 Global News: Meet the Winnipeg Jets emergency goalies. Russ introduces you to the guys who could get called on if all else goes wrong for the home side.

Topics: Reflections on the Washington Capitals winning the Stanley Cup. Will the Jets sign Josh Morrissey to a bridge or long-term deal? What should we expect from the Jets at the 2018 NHL Entry Draft? The Islanders removing GM Garth Snow/coach Doug Weight, adding Lou Lamoriello as president of hockey operations and general manager and how it all might impact John Tavares future.

Topics: UFA of the Week (John Carlson). A look at the first Trade Bait Board of the summer. Dallas Stars and Valeri Nichushkin agree to a two-year deal.