Note:  The Jets are in Vegas for game 3 tonight against the Golden Knights as both squads look to take the lead in the best of seven series with a chance to advance to the Stanley Cup Final.  Players and coach Maurice spoke yesterday after traveling to Sin City about the challenges of tonight’s contest.  The Jets are slated to have their morning skate at 10:30 am in the Pacific Time Zone (so 12:30 pm here in Winnipeg) and our Practice Report will bring you up to speed with the latest news.

Note II:  While the focus is on the Stanley Cup Playoffs there was some unexpected Jets contract news as Jim Toth of TSN 1290 Winnipeg had an interesting nugget on Jacob Trouba.

Winnipeg Sun:  Can road warriors keep it up?

Winnipeg Sun:  Even two-game skid could be beginning of the end.

Winnipeg Sun:  Not much has changed since Nashville series for Jets, they’re still in a dead heat. 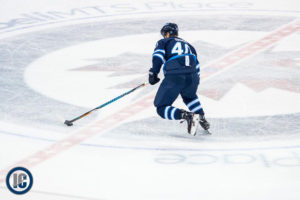 Global News: ‘This place is real’: Winnipeg Jets owner on the city and the dream.

The Athletic: How Vegas, led by Jonathan Marchessault, stepped up its play in Game 2. (Paywall).

TSN: The Jets will try to play the same way in Game 3. TSN Senior Hockey Reporter Frank Seravalli talks about some of the positives that the Jets hope to bring over from Games 1 and 2 and what they should be concerned about matching up with the Golden Knights’ red-hot top line.

TSN: Forecheck in Game 2 key to Vegas snatching home-ice from Winnipeg. With Vegas now holding home-ice advantage in the series, a place they have lost just once in the playoffs, That’s Hockey looks at what the Golden Knights did so well in Game 2 that has gotten them into this position.

Sportsnet: Who will show up for Jets in Game 3 against Golden Knights? NHL insider John Shannon joins Evanka Osmak to preview Game 3 between the Winnipeg Jets and Vegas Golden Knights.

Sportsnet: Playing in raucous environment nothing new for Jets. Nikki Reyes reports from Las Vegas where the Winnipeg Jets are preparing to meet the Vegas Golden Knights in Game 3.

TSN 1290 Winnipeg: It’s fantastic to see how well the Jets are doing. Former Winnipeg Jets forward Jim Slater joined Andrew Paterson and Rick Ralph on the Afternoon Ride. They discuss how closely he’s paying attention to the Jets playoff run, his experience playing in front of the raucous Winnipeg crowd, Blake Wheeler’s impressive post-season, Dustin Byfuglien’s incredible strength, his experience playing for Team USA at the Olympics and plans for next year.

TSN 1290 Winnipeg: Vegas forwards do an incredible job of forechecking. Andrew Paterson and Rick Ralph look back on the Jets Game 2 loss to Vegas. They are joined by guests: David Purdum of ESPN Chalk (10:14) and NHL analyst Mike Kelly (20:06).

TSN 1290 Winnipeg: Jets have brought their game to another level. Former Winnipeg Jets defenceman Grant Clitsome joined Andrew Paterson and Rick Ralph on the Afternoon Ride. They discussed what he’s seen from the Jets in the playoffs, his experience playing with Dustin Byfuglien, the Jets group of young defencemen, his injury status and what he’s been up to in retirement.

TSN 1290 Winnipeg: Fleury is unpredictable when dialed in. TSN Hockey analyst Andy Chiodo joined host Kevin Olszewski to break down the play of Marc-André Fleury so far in the Stanley Cup Playoffs and why he has been a challenge to score on.

TSN 1290 Winnipeg: Jets provide biggest challenge yet for Vegas. TSN’s Bob McKenzie joined the Big Show to talk NHL Conference Finals including Washington’s surprising series lead, the emergence of Jacob Trouba and how the Jets are a different animal compared to anything the Golden Knights have faced yet.

TSN 1150 Hamilton: Game 2 was a wake up call for Jets. Jamie Thomas from Winnipeg Jets TV joins Tatti and Louie B to breakdown Winnipeg’s loss in Game 2 and how it will impact the rest of the series as it shifts back to Vegas.

TSN 1260 Edmonton: Vegas created their own luck. Hockey analyst Jamie McLennan joined Dustin Nielson to breakdown the Golden Knights’ Game 2 victory over the Jets and sets up tonight’s Game 3 between the Capitals and Lightning.

ESPN: Vegas responds. The Golden Knights bounced back for a win in Game 2 against the Jets. Which team is now the favorite to advance? Plus, does the NHL expansion system need tweaking?