Note:  The Jets won an epic contest last night in downtown Winnipeg when they came from behind to defeat the Predators 7-4 in Game 3 to take a 2-1 series lead.  While fans will revel in the win the team, I suspect, will already be talking about game 4 when they hold their media availability today at 12 noon.  Tune into the Jets Playoff Practice Report for the latest news and audio.

Note II:  The Moose will speak around 12:30 pm today as they reflect on their 1st round series win over the Grand Rapids Grffins and look ahead to their upcoming 2nd round series against the Rockford Icehogs which begins on Friday here in Winnipeg.

Note III:  Did you really think you’d have a night off from hockey talk?  Nope.  Tune in for two hours of Winnipeg Jets and NHL hockey talk on NHL This Week with Illegal Curve on TSN 1290 Winnipeg starting at 6 pm.

Winnipeg Sun:   Jets complete rally to take a 2-1 series advantage.  Hard to believe that final score based on the opening frame of hockey we witnessed at Bell MTS Place.  Ken recaps all the action.

Winnipeg Sun:  Byfuglien dominant in Jets win over Predators.  The Jets Big Man was a difference maker last night for his Jets team when they were down two goals to Nashville.  He looked like he was single minded of purpose and that purpose was to get the Jets a goal. 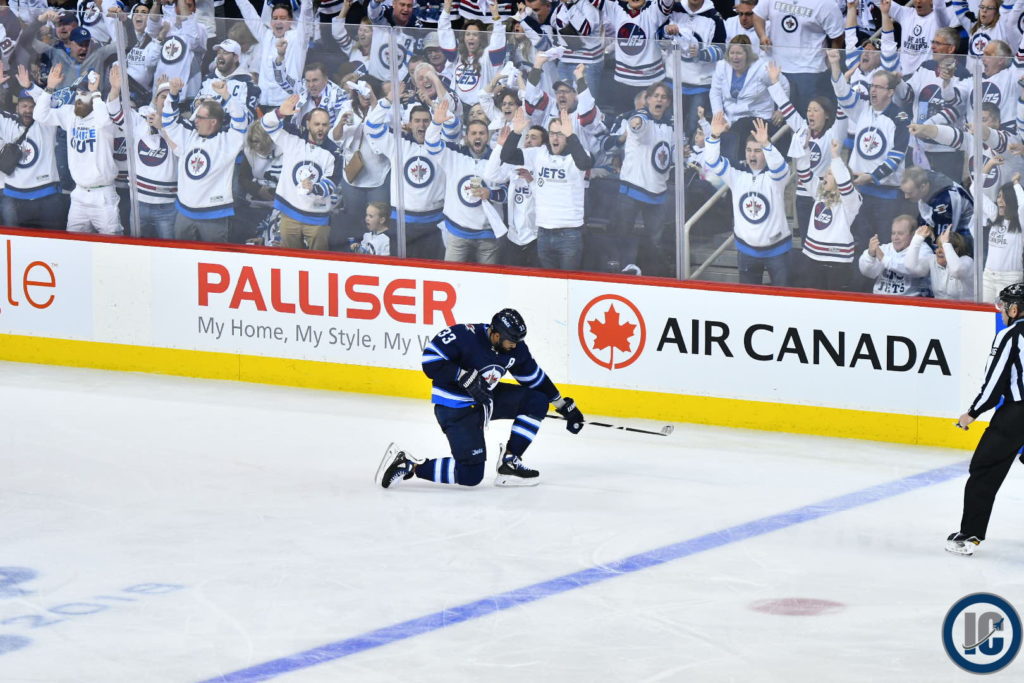 Winnipeg Sun:  Jets’ second-period comeback against Predators was one for the ages.  Considering what was on the line I’d be hard pressed to remember a more significant effort by this Jets squad.

Winnipeg Free Press:  Jets spring back from a 3-0 deficit to win 7-4.  (Paywall).  I suspect a fair number of scribes had already written their game stories after 20 minutes but the next 20 forced them back to square one after the Jets put on a performance to remember.  Mike recaps all the action from Bell MTS Place.

Winnipeg Free Press:  Subban is booed because he’s good.  (Paywall).  The premise that Whiteout fans should be careful of the optics of booing Subban was so painful and I actually didn’t think it was intended as a serious comment.  Apparently it became a thing.

Winnipeg Free Press:  Stastny’s veteran savvy pays big dividends.  (Paywall).  He has been such an excellent addition for the Jets and his addition, even if it is just short term, will have an impact on the younger Jets for years to come.

The Tennessean:  Preds need to find discipline and fast.  If they play like they did in the last two periods of Game 3 it may not be as long a series as we previously believed it would be.

The Tennessean:  Predators ‘just stopped playing,’ blow 3-goal lead in Game 3 loss to Jets.  Adam covers the Preds as close as anyone and he recaps last night’s events.

TSN:  Jets’ spine-tingling ‘it’ factor on display in Game 3 comeback win.  Frank with a good breakdown of last night’s Jets win and what it could possibly mean.

Sportsnet: Jets deliver another classic performance in pleasing series with Predators.  Hard to describe that game as anything other than classic.  It will certainly be a game we here in Winnipeg talk about for quite a long time I suspect.

The Athletic: A knockout punch? Time will tell, but Predators definitely rocked by the Jets. (Paywall).  While the Jets seem like giant killers last night in this series it isn’t healthy to assume the that it can easily be predicted.

The Athletic: Jets’ Game 3 comeback win another special sign from a team that’s seizing the moment. (Paywall). It did have the feeling like last night’s game was different.

CBC:  Jets give home fans emotional ride in comeback win over Predators.  Not just any win.  It was the first ever home victory in the 2nd round in the history of NHL hockey in Winnipeg.

Globe and Mail: ‘Fans are living a dream’: Winnipeg celebrates the Jets’ playoff run.  It is all anyone is talking about.  When you drive around the city and look at the offices or businesses or residential areas the open displays of Jets fandom is everywhere.

In Goal Magazine:  Steve Mason transforms Jets trainers into fighter pilots on new mask.  Nice way to honour the guys who do so many things for the players. Check out the pictures to see some of the details.

TSN:  Did hit on Wheeler spark Jets to the win?  In the second period, the Preds were up 3-1, then Auston Watson hit Blake Wheeler, which as Sara Orlesky, Pierre LeBrun and Frank Seravalli explain, was the TSN Turning point of the game as it ignited the Jets, who then stormed to victory.

TSN:  Wheeler and Byfuglien take centre stage in Jets’ incredible win.  Blake Wheeler and Dustin Byfuglien both scored a couple goals and added an assist each as the Jets climbed out of a 3-0 hole before winning the game. The TSN Hockey panel has more on what the two veterans did to lead the way.