Note:  The Jets picked up a big 2-0 win last night in St. Paul as they took the fourth game in this series and are now up 3-1 over the Wild.  Last night wasn’t without controversy however as many folks and Wild players were fuming that Josh Morrissey didn’t get a penalty for his cross-check of Eric Staal.  Some folks feel like there will be supplemental discipline which for a Jets team that is already using their seventh, eighth and ninth defencemen could pose a problem.  The team will have some recovery time as they don’t play game 5 until Friday night at Bell MTS Place with the chance to close out the series over Minnesota.  The Jets were scheduled to practice but have cancelled it and will simply make coach Maurice available to speak at 12 noon.

Note II:  The Moose are back on the ice at the IcePlex as they get ready to face the Grand Rapids Griffins on Saturday in game 1 of their 1st Round playoff series.  You really got the sense yesterday during media availability that this team is eager to do some damage in the post-season.  And in what is becoming the norm the team continues to add players to the fold although yesterday they got a St. Louis Blues prospect and Brandon Manitoba product Tanner Kaspick (2016 4th rounder) who was assigned to Manitoba.

Winnipeg Sun:  Hellebuyck stands tall as Jets take 3-1 series lead.  We all saw and heard the numbers for Connor Hellebuyck the game after he gave up a lot of goals and once again the Jets goalie put on a solid performance to bounce back and get the W for his team. 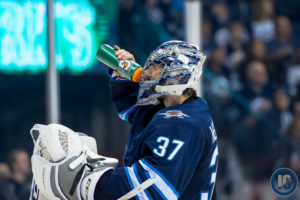 Winnipeg Sun: Parise loss big break for the Jets.  Big may be a small understatement for a player who had scored in every game of the series before last night.

Winnipeg Free Press:  Hellebuyck stones Wild as Jets grab stranglehold on series.  (Paywall).  On the same day he gets a Vezina nod the Jets netminder put up a hell of a performance.

Winnipeg Free Press:  Morrissey, Jets get away with one.  (Paywall).  Well they may have gotten away with one in the game but there could still be some pain if the Department of Player Safety decides to intervene.

Minneapolis Star Tribune:  Wild lose Parise, and are on the ropes after shutout loss to Jets in Game 4.  Sara gives you a breakdown of the game from the perspective of a writer who covers the Jets opposition.

Minneapolis Star Tribune:  Game 4 turns nasty between Wild and Jets.  It is inevitable that when you face a team this many times in a short period of time the feelings are gonna boil over which is what we are seeing in this series.

TSN:  Hellebuyck tames the Wild, calms surging Jets.  No lack of confidence from the Jets netminder and that is a good thing as he tries to keep adding wins in the team’s quest for 16 total this post-season.

Sportsnet:  Wild, Boudreau lamenting blown cross-check call as elimination looms.  Not difficult to understand why they are so upset after that call would have given them a big 5 on 3 opportunity.

Sportsnet:  Connor Hellebuyck comes up with ‘textbook’ bounce back game for Jets.  He is their number one goalie for a reason and showed why with last night’s effort.

The Athletic:  Jets didn’t doubt Hellebuyck’s ability to bounce back and find Vezina-calibre form.  (Paywall).  Do you notice a common theme with today’s articles about the Jets netminder?

CBC: Winnipeg suffocates Wild in a bounceback Game 4 victory.  It is pretty clear this is a banged up Minnesota squad who are doing the best with what they have but it is hard to compare their present squad to the one the Jets are able to ice.  Last night that was on display.

CBC: Cheering ‘Go Jets go’ killing your voice? Here’s how to keep it in tip-top shape.  This could prove to be good intel for Jets fans ahead of game 5 on Friday.

TSN:  Wild’s strong play in the middle of the ice stresses importance of capitalizing on chances.  Heading into the Jets-Wild series TSN Hockey analyst Dave Poulin thought it would be a low-event series and it played out in Game 4 as both teams took away time and space with their strong defensive play.

Sportsnet:  Wheeler installing hockey passion from Minnesota into Jets. The passion for the game that Blake Wheeler gained hailing from Minnesota, is being instilled into the Winnipeg Jets.

Illegal Curve:  News and Notes.  Includes a health update, back in the playoffs, goalie plan, Sami Niku up with the Jets, Blues loaning of Kaspick and interviews with Nic Petan, Cameron Schilling and coach Vincent.

Winnipeg Free Press:  Healthy Petan pumped for Moose playoffs.  (Paywall).  It was pretty clear when we spoke to him yesterday that after years of post-season success with the Winterhawks it was wearing on him not playing in the playoffs as a pro but he is clearing relishing this opportunity.