Note:  After game 1 had the entire city pumping what will game 2 bring?  Stay tuned to find out as the Jets and Wild get ready to kick off the second game in this best of seven series tonight in downtown Winnipeg.  The Winnipeg Whiteout Street Party was so successful that they have expanded it significantly.  The Jets held an optional skate on Thursday which left us with just as many questions today as we had going into the practice.  Perhaps we will have more clarity when the Jets morning skate gets underway at 9:30 am and you can stay tuned via our pre-game report which will bring you right up to speed with all the latest news.  Keep it locked to our social media for updates including: Twitter |Facebook | Instagram.

Note II:  The Moose played in Cleveland, Ohio last night and they picked up a much needed win against the Monsters.  Once the dust had settled rookie of the year Mason Appleton (who won the award yesterday) had a goal and assist as he battles for top spot in scoring in the AHL (currently sits 4th).  Michael Hutchinson picked up his second shutout of the year facing the least number of shots (13) directed his way this season to improve to 17-5-4-1 on the year.

Sportsnet:  How it feels to be stuck in a Winnipeg Whiteout.  No question about it that it is a lot of fun for folks who get a chance to take part.

Winnipeg Sun:  Ehlers gets rush from crowd.  First Joe Morrow spoke about it after game 1 and yesterday it was Nikolaj Ehlers turn to talk about how the team draws energy from the reaction of the crowd. 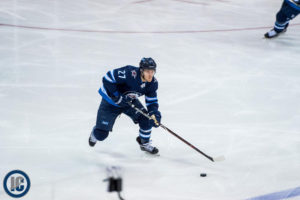 Winnipeg Sun:  Bang for your Buff as Winnipeg D-man is Jets X-factor.  No question about it he has certainly been something to watch this season.

Winnipeg Free Press: Laine is OK with role as decoy on the power play. (Paywall).  Considering the offensive weapons this team has at their disposal it really is a pick your poison type of situation.  Cover Laine, leave Scheifele open.

Winnipeg Free Press: Wild lament missed opportunities. (Paywall).  They are a veteran team and it will be interesting to watch them adjust tonight.

Winnipeg Free Press:  One down, 15 to go… nothing to celebrate as it is business as usual for the Jets.  (Paywall).  The Jets have had a mantra all season long about not getting too high or conversely getting too low with wins and losses so this isn’t overly shocking that the team wouldn’t be jumping for joy after the first win of 16 needed to claim the ultimate prize.

Winnipeg Free Press:  Rest of Jets-Wild series unlikely to veer much off Game 1 course.  (Paywall).  Former NHLer turned scribe Scott Campbell with his view of this first round matchup and how he doesn’t expect it to really deviate from what we witnessed on Wednesday night.

The Athletic Winnipeg: What impact each of the Jets defence pairings will have against the Wild. (Paywall).  Murat goes deep to break down the Jets back end.

The Athletic Winnipeg: The Jets found success against the Wild by cashing in on a defensive weak spot. (Paywall).  Another look at the Jets were able to exploit a weakness.

The Athletic Minnesota: Carson Soucy has been put in a difficult spot, but Wild need him to grow up fast. (Paywall).  Longtime Wild beat writer takes a look at one player that the Jets may be keying on and how he will need to adapt in order to help his club.

CBC: Creator of Winnipeg Jets’ whiteout awed by tradition’s endurance.  Must be quite a feeling of pride having created something that an entire city has embraced.

TSN:  Jets’ fourth line was dominant early in Game 1.  TSN Hockey Insider Pierre LeBrun talks about how the Jets’ fourth line set the tone in Game 1 and how important the group will be during what Winnipeg hopes is a deep playoff run.

TSN 1290 Winnipeg:  The atmosphere in Winnipeg was sensational.  TSN Hockey Insider Pierre LeBrun discussed the Jets game one win vs. Minnesota, the effect the crowd had on the game, how Minnesota managed without Ryan Suter and the effectiveness of the Jets fourth line.

TSN 1290 Winnipeg:  Maurice’s system is relentless.  Former Winnipeg Jets defenseman Adam Pardy spoke with Andrew Paterson and Rick Ralph about the Jets game one win vs. Minnesota, his experience playing for the Jets during the 2015 playoffs, Patrik Laine’s shot, Nashville’s chances for a Stanley Cup and his year playing in Sweden.

TSN 1040 Vancouver:  Wild vs Jets is David vs Goliath on paper.  Jamie McLennan says Winnipeg is very much the stronger team than Minnesota.

Illegal Curve:  Mason Appleton has won Dudley Garrett Award for AHL outstanding rookie.  It has been a season to remember for the Jets prospect who began the year with the intention of just “making the team”.