Note:  The date is finally here.  The Jets will kick off the 2017-18 playoffs with a big home contest in Winnipeg as they welcome the Whiteout (and the Wild) to the not so friendly confines of Bell MTS Place.  Morning skate gets underway at 9:30 am and the pre-game report will bring you right up to speed with all the latest news.

Note II:  The Moose travel today to Cleveland, Ohio as they get ready to finish off their regular season.  While they have clinched a playoff spot where they will finish in the Central is anyone’s guess.  They can go along way towards self-determination by picking up some wins in these last three games.  The Moose news and notes will give you some insight into the team although the big news of the day was the announcement that Sami Niku was just the second rookie in 60 years to win the Eddie Shore Award for best defenceman in the AHL.

The Athletic Winnipeg:  How Connor Hellebuyck went from unknown NAHL invite to the Stanley Cup playoffs.  (Paywall).  Not quite a Milan to Minsk type story but if you’re curious about the progression of the Jets top netminder here ya go.

Winnipeg Sun:  Jets enter series as favourite with a chance to write history beginning against the Wild.  In this instance I suspect they will be fine with the moniker but won’t allow it to really get into their own heads and make them lose sight of the fact that the Wild could be formidable opponents.

Winnipeg Sun:  Whiteout is something special for Jets players, past and present.  Lots fondly recall the efforts of this fanbase as they tried to be the seventh man/woman in the rink.

Winnipeg Sun:  Playoff gong show?  What is goalie interference?  Your guess is as good as anyone else’s.  The NHL has to know that there will be a lot of scrutiny and unlike in the regular season there are big ramifications for any errors. 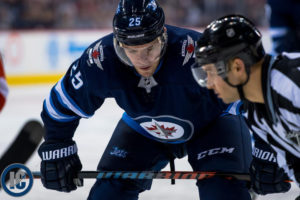 Winnipeg Sun:  Jets fourth line ready for tough defensive assignment, to pitch in on offence.  Lots of growth from the last time around for some of these guys and specifically it will be interesting to see how Lowry handles it.

Winnipeg Sun:  Jets win games when they are physical as team says Byfuglien.  Fans certainly won’t complain if the big man throws his weight around during the game although I suspect they would prefer he have the puck on his stick instead.

Winnipeg Sun:  Trouba prepared to play with tweaks to ankle injury during playoffs.  While the Jets top-pairing defender may think it is no big deal I suspect most folks around him don’t want to risk that happening again.

Winnipeg Free Press:  Chiarot, Morrow D-lighted to play key roles while Enstrom, Kulikov out.  (Paywall).  Life is about opportunity and making the best of what is presented to you.  These two are getting quite the chance and quite the stage to show the hockey watching world what they’ve got.

Winnipeg Free Press:  Scheifele champing at playoff bit after early exit in 2015.  (Paywall).  All these experiences have helped form the type of player he has become and going through that tough test three years ago has likely helped the Jets top centre immeasurably. 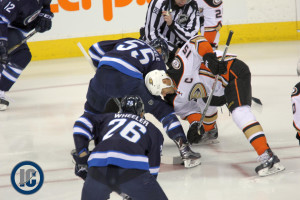 Winnipeg Free Press:  Playoff hockey means you’ve gotta pay the price… to watch the Jets, that is.  (Paywall).  I suspect the irony that you need to pay to read this article is lost on nobody.  There is a very valid concern that those who would like to watch the game but cannot afford to pay will be left out in the dark and that is unfortunate.

Minneapolis StarTribune:  Wild embraces new role in playoffs as underdogs.  What a difference a year can make.  One moment you are a heavy favourite and the next you are the present incarnation of these Wild.

Minneapolis StarTribune:  Wild must keep track of Jets’ Patrik Laine and his prime shooting spots.  Lots of teams have similarly game planned and more often than not it has been unsuccessful.  Perhaps coach Boudreau has a secret formula.

CBC: Couple’s ultimate Winnipeg Jets ‘fan cave’ a tribute to love not just for team, but for each other.  Couples who watch Jets games together stay together is the mantra I’m guessing.

CBC:  Manitoba visit turns Dutch man into one of the Jets’ biggest fans.  Rowdy the Dutch Jets fan gets an article.  Rowdy usually calls into our show when we have the call in portion a few times a year.  Nice article about the big Jets fan from across the pond.

TSN:  The Jets can beat you in about 10 different ways.  The TSN Hockey panel previews the Jets’ first playoff series since 2015 as they get set to face off against the Wild on Wednesday. Sara Orlesky also explains what the three important factors will be for Winnipeg to win the first round matchup.

TSN:  Post 2 Post (Dubnyk vs Hellebuyck).  With Devan Dubnyk set to clash with Connor Hellebuyck in the first round of the playoffs, TSN Hockey analyst Jamie McLennan takes a closer look at who has the edge in net.

Sportsnet:  History of Winnipeg Jets defined by heartbreak and hope.  Sean Reynolds looks at the past of the Winnipeg Jets, with the initial hope around the city eventually giving way to disappointment and heartbreak after playoff losses and having the team uprooted from Manitoba.

Sportsnet:   Jets focusing on what got them to playoffs.  Mark Scheifele called into Tim and Sid to discuss how the Winnipeg Jets will approach the long grind of the playoffs.

Sportsnet:  Jets GM on being a Stanley Cup favourite.  Jets GM Kevin Cheveldayoff joins Daren Millard, Nick Kypreos & Damien Cox to discuss the Humboldt Broncos bus crash, the tribute given to the victims by his club & the Blackhawks in their final regular season game, playing a first round series vs. a regional rival, how much time he had to enjoy the success Winnipeg found thus far, getting his young stars acclimatized to playoff hockey, Connor Hellebuyck’s solid season, and being seen as a heavy favourite vs. the Wild.

TSN 1290 Winnipeg:  There’s not a better feeling than hearing the Winnipeg crowd.  Former Winnipeg Jets forward Keith Tkachuk joins Andrew Paterson and Rick Ralph on the Afternoon Ride. They discuss his experience playing playoff hockey in Winnipeg, how much playoff experience is a factor, the impact of home ice advantage in the playoffs and what Paul Stastny brings to the Jets lineup.

TSN 1290 Winnipeg:  Winnipeg forward depth will outlast Minnesota.  TSN 1290 broadcaster Paul Edmonds joins Andrew Paterson and Rick Ralph on the Afternoon Ride. They discuss the expectations for the Jets heading into this season, the players excitement level to get started, how the Jets match-up with Minnesota and if the Jets lack of experience will be a factor.

TSN 1290 Winnipeg:  Jets top power play is as good as it gets.  Murat Ates of The Athletic joins Andrew Paterson and Rick Ralph on the Afternoon Ride. They discuss what Ryan Suter’s absence means for Minnesota, why the series might not be as one-sided as the standings would indicate, the goaltending match-up between Dubnyk and Hellebuyck, who has the advantage on special teams and what he expects to see in the series.

TSN 1290 Winnipeg:  The Jets depth is spectacular.  TSN That’s Hockey host Gino Reda joins Andrew Paterson and Rick Ralph on the Afternoon Ride. They discuss the aftermath of the Humboldt tragedy, how deep the Jets can go in the playoffs, the Jets lack of playoff experience, how Auston Matthews will match up vs. Patrice Bergeron, if Vegas can get past the LA Kings, which Canadian team is most likely to return to the playoffs next season.

Illegal Curve:  Moose news & notes. Includes: 1) Handing out the Hardware. 2) Players on the mend. 3) Sticking to the basics. 4) New face on the squad.

Illegal Curve:  Sami Niku has won Eddie Shore Award for outstanding defenceman in the AHL.  It has been an excellent season for the dynamic Finnish defender.