Note:  The Jets continue to prepare for the Wild as they ramp up towards game one of this series when the NHL officially kicks off the Stanley Cup Playoffs.  It was a busy day at the IcePlex yesterday which included updates on Tobias Enstrom and Matt Hendricks.  Today the team will hit the IcePlex again for another day of practice at 11 am. The Jets Practice Report will bring you up to speed once again.

Note II:  The Moose will practice at 10 am today as they continue to prepare for the final regular season road trip of the year.  The Moose will travel on Wednesday to Cleveland where they have two games against the Monsters followed by the regular season finale on Sunday in Chicago against the Wolves.  Considering the uncertainty with respect to playoff positioning that final game of the AHL season could prove pivotal.

Winnipeg Sun:  Jets must win a round, at least.  This team has done well this season by not looking ahead past their next game so I suspect they will keep the focus on game 1 and trying to put a win on the board.  Then they can worry about the next one and the next two after that.

Winnipeg Sun:  Jets goalie not feeling any extra pressure as Hellebuyck is ready for big stage.  He is much more relaxed this year than he has ever been since joining the NHL.  He seems much more comfortable and it is similar to how he was when I covered him in the AHL when he played for the Moose.  That is a good thing for the Jets.

Winnipeg Sun:  ‘This is what we play for’.  The Jets will be able to draw from the experience of a player like Perreault and he is relishing the opportunity to do some damage.

Winnipeg Sun:  Jets scoring star Laine has head start on the traditional playoff beard.  That’s like saying the guy who starts his Movember mustache in September did well by having a Fu manchu by November. 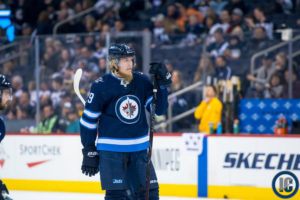 Winnipeg Sun: Jets captain Wheeler crazy about the Vikings but has no love for the Wild.  No divided loyalty for the product of Plymouth, Minnesota for the team that plays hockey in his home state and that really shouldn’t come as much of a surprise.

Winnipeg Free Press:  Jets relatively healthy along the blue-line.  (Paywall).  And to think they still don’t have Enstrom and Kulikov.  The team will benefit when they get those two back to have true depth on the backend.

Winnipeg Free Press:  CBC shut out of Jets games which are only available on Sportsnet.  (Paywall).  Folks may want to check their TVs in advance of tomorrow’s game to ensure you get the channel the game will be on.

Winnipeg Free Press:  Perreault looking to snap scoring slump.  (Paywall).  It seems unusual that this line cannot generate more offence given the players on it.  Perhaps the playoffs will bring about a reset for #85 and his linemates.

Winnipeg Free Press:  Jets’ young scoring threats eager to get playoffs started.  (Paywall).  While they may not have a lot of NHL playoff experience across the board these players have all had success at lower levels and with the way they have played this season it shouldn’t be too much of a culture shock when they get to the playoffs.

NHLcom:  Byfuglien keeping things light with Jets.  One thing big 33 does well is to keep things jovial around the rink. 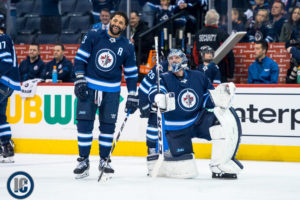 Minneapolis Star-Tribune:  Wild’s Staal has goal record; now he wants to lead a deep playoff run.  Can a Jets team be done in by the product of Thunder Bay?  He has certainly had a season to remember and will be a formidable opponent.

The Athletic Winnipeg: The 2017-18 Jets are the best team in Winnipeg’s NHL history. (Paywall).  Good thing Murat qualified it by saying NHL otherwise there would have been a number of folks with memories that date back to the WHA days who would have a bone to pick with him.

The Athletic Winnipeg:  A Winnipeg Jets vs. Minnesota Wild series preview by the numbers. (Paywall).  While the expectation is a Jets series win you shouldn’t count out the Wild entirely with a look at the numbers.

NBC Sports:  Home crowd can help fuel long playoff run for Jets.  While the players still have to play the game on the ice the atmosphere inside Bell MTS Place is sure to be electric.  The Jets will have to hope this gives them an extra bump to what is already the best home team in the NHL.

NHLcom:  Jets ready for whiteout, looking for extended postseason run.  Cannot believe it has been 31 years since a series win.  Of course this reincarnated team is simply looking for their first win but it isn’t unreasonable to think that we could be a seeing series win or four this spring.

TSN:  How much pressure is on the Jets to succeed?  The Wild will be without one of their key players on the blue line heading into their series with the Jets and Jamie McLennan explains why Ryan Suter’s absence puts that much more pressure on Winnipeg in round one.

TSN:  Jets preparing for what they hope is a long playoff run.  The playoff white out will be in full force Wednesday night when Winnipeg hosts the Wild in their first round series. And while it may look similar to 2015’s playoff team, this Jets squad is far more prepared for a deep playoff run. Sara Orlesky explains.

Sportsnet:  Can the Jets & Leafs make runs in the playoffs?  Nick Kypreos joins Tim and Sid to discuss the NHL Playoffs and to give his predictions for the first round.

TSN 1290 Winnipeg:  This Jets playoff appearance feels different.  Tim Campbell of NHL.com joins Andrew Paterson and Rick Ralph on the Afternoon Ride. They preview the Jets series vs. Minnesota, how this series feels different than the last Jets playoff appearance, the Jets lack of playoff experience, how goaltending will be a factor in the series.