Note:  The Jets completed their 82 game regular season schedule last night with a 4-1 win over division rival Hawks at Bell MTS Place in an emotional game dedicated to the memory of the victims of the Humboldt Broncos who were involved in the horrible bus crash two days ago.  The team is off today and will be in Stanley Cup Playoff mode come Monday when they turn their full focus on the Minnesota Wild.

Note III:  The Moose made some news on Saturday beginning with the signing of Jets 2016 5th rounder Jordy Stallard to an ATO.  The team was idle last night but still managed to clinch a playoff spot for the first time since they returned to Winnipeg.  Today, they will conclude their home season finale at 2 pm against the Condors before they close out 2017-18 with three games on the road.

Winnipeg Sun: Playing with heavy hearts, Jets close out remarkable regular season with win over Hawks.  From the start of the day until the end it was an emotional one for folks in hockey.  Ted recaps the day. 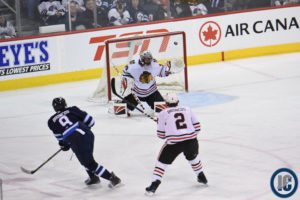 Winnipeg Sun:  Jets broadcaster Brian Munz grieving for hometown of Humboldt.  While we can all empathize it is even more poignant for those who lived there.

Winnipeg Free Press:  Jets down Blackhawks, pay tribute to Broncos.  (Paywall).  The Jets looked like they were in complete control for most of the game.  Mike recaps events including the tribute to our neighbors one province over in Humboldt.

Winnipeg Free Press:  Jets react to horror of Humboldt crash.  (Paywall).  It was evident by the emotion in their voices that it hit the Jets players close to home.

Sportsnet:  Wild and Jets preview.  A good look at how these two squads match up.

Illegal Curve:  Moose sign Jets 2016 5th rounder Jordy Stallard to ATO.  Another player added to the fold for the Moose as they make their playoff push

Topics: Playoff races and First Round matchups come down to the final weekend of the regular season, Coaches on the hot seat to end the season, The favourites to win the Norris Trophy