Note:  The Jets played a poor game in Chicago as they dropped the first game of this four-game roadtrip 6-2 last night although the story of the game was the need for emergency backup goalie Scott Foster to play the final 14:01 of the game after starting goalie Collin Delia was injured in the 3rd period. Foster, who is an accountant by day, made his NHL debut at 36 while Delia, who had just beat the Moose in Winnipeg on Monday, was also making his NHL debut last night.  And while Delia deserves recognition for what he achieved this week, the attention was rightfully on Scott Foster last night.  The Jets have the day off today and will be back on the ice on Saturday as they prepare to face the Leafs on Saturday night.

Note II:  The Moose face an enormous challenge this weekend as they battle the top team in the AHL in the Toronto Marlies beginning with a game tonight at Bell MTS Place.  This is the fifth game of eight in their home rink and they will be looking to right the ship as they have now dropped three straight games and slipped into 2nd place in the central division.  Morning skate gets underway at 10 am with puck drop at 7 pm.

Winnipeg Sun:  Six-game winning streak snapped by Blackhawks.  Ken recaps the game from his seat inside the United Center.

Winnipeg Free Press:  Jets take night off; Blackhawks take the win 6-2.  (Paywall).  Jason offers up his thoughts on the contest.

Winnipeg Free Press:  Rest, chemistry need to be balanced as Jets regular season winds down.  (Paywall).  Former NHLer turned scribe Scott Campbell offers up his thoughts on what the Jets need to do in order to have success with the post-season fast approaching.

Chicago Sun-Times:  Blackhawks beat Jets with 36-year-old rec-leaguer Scott Foster in goal.  While Jets fans were likely upset with the loss it is hard to remain that way when you read the story of Scott Foster. 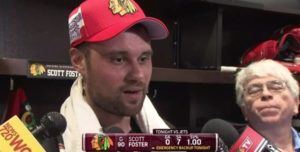 Chicago Sun-Times:  From the ECHL to the NHL, it’s been quite a season for Blackhawks’ Collin Delia.  I watched him beat the Moose on Monday and he was excellent and then in his NHL debut he was on his way to capping off a very impressive week before the injury took him out.  While the Scott Foster story is an amazing one it did overshadow the Delia story.

TSN:  Accountant by day, Hawks emergency goalie named No. 1 star.  If Zane Kalemba was a star for backing up Connor Hellebuyck when Michael Hutchinson was in transit and didn’t arrive until the 2nd period, what does that make Scott Foster?

TSN:  Using the regular season as a postseason playbook.  Jets fans will find plenty of nuggets in this look at the numbers.  Plenty of depth for Winnipeg to draw upon as the postseason approaches.

CBC:  Is it the Leafs or Jets which have better shot of ending Canada’s Cup drought?  It will be a tall order for either of these squads to win it all this season but they will both make it very interesting to watch.