Note:  The Jets completed their six-game homestand last night with a 5-4 shootout win over the Bruins.  The team was scheduled to practice but instead will leave on the final road trip of the regular season which gets underway with a game tomorrow night in Chicago.

Note II:  The Moose welcomed C.J. Suess to their ranks yesterday although the team didn’t skate which means he may not make his Manitoba debut until this weekend.  In addition to Suess being a question mark the team may also get back Nic Petan and Brendan Lemieux who are both dealing with injuries but were listed as possible for tonight’s re-match with the Icehogs according to their coach.  The morning skate is at 10 am so we may get a better idea as to what to expect from the home side.  I will be joining voice of  the Moose Mitch Peacock for the final time this regular season in the broadcast booth.  Pre-game show gets underway at 6:45 pm and puck drop is at 7 pm.

Note III:  Tune into a late edition of NHL This Week with Illegal Curve Hockey on TSN 1290 Winnipeg once the Moose game ends.  The guys will have two hours of the latest Jets and NHL hockey talk.

NBC Sports: Morrissey avoids suspension for hit on Bruins’ Grzelcyk.  Good news for the Jets as they could ill afford to lose 44.

Winnipeg Free Press:  Tanev touch too much for Boston.  (Paywall).  It was the unlikeliest of players who picked up the 12 hat-trick scored since the team relocated to Winnipeg. 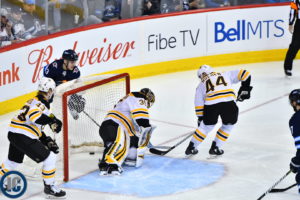 NESN:  Jets prevail 5-4 in wild, exciting shootout win over B’s.  Read about the game from the perspective of someone who covers the Jets opposition.

Winnipeg Sun: Fourth-liner Tanev’s magical night helps Jets to shootout win over Bruins.  When he got his second of the night I started to look back to see how many times he had accomplished this and it turns out it was just once previously.  He certainly had a night to remember.

Winnipeg Sun: Jets doing things previous iterations couldn’t.  It really begins and ends with one word – depth.  This team has depth that no other Winnipeg team had even come close to matching.

Winnipeg Sun: After suffering gash on chin, Laine says ‘Just save the beard’.  I said after we saw the gash on Sunday night that fans should run out to the concession stands to grab some ketchup for their fake beards to keep it authentic.  Clearly the Jets sniper is attached to his facial hair.

Winnipeg Sun:  Young guns Laine, Connor and Ehlers have combined for 100 goals this season, 40% of Jets scoring.  Jets certainly are getting some bang for their buck thanks to these young guns.  May need a new version of the Young Guns poster from the Jets 1.0 days.

Winnipeg Sun:  Jets defenceman Tyler Myers recognized for ability to bounce back with Bill Masterton nomination.  A worthwhile nominee for everything that he was able to overcome.

TSN:  Jets get it done in testy, chippy affair.  The Jets, Bruins game was testy, chippy and had a playoff feel to it and as TSN’s Director of Scouting Craig Button explains, good teams find ways to win when the game plan goes out the window, like Winnipeg did Tuesday.

TSN:  Jets dominating 5-on-5 offensive zone possession.  The Winnipeg Jets have won three games in a row against top 5 defensive teams. The games have been very close, but the play at 5-on-5 has been incredibly one-sided. Mike Kelly explains in this edition of StatsCentre.