Note:  Following last night’s 3-2 win over the Devils in New Jersey the Jets are scheduled for an 11 AM CST practice at Well Fargo Center in Philadelphia.  Winnipeg has won four straight now and as I tweeted last night have really become road warriors improving from a pedantic 10-10-6 mid January to 17-10-7 in their last eight games away from Bell MTS Place.  Update:  The Jets Practice Report is live and has the latest from today’s skate including health updates on Kulikov, Morrissey (fine), Scheifele, Lowry, Trouba and Mason.  To read click here.

Note II:  The Moose, sans Michael Hutchinson after his recall to the Jets, have another day of practice today as they get ready to face Chicago in a huge battle in the Central Division on Saturday night.  Manitoba will have a chance to sit back in Illinois for a night while the Wolves are in Milwaukee tonight to play against an Admirals team that just beat the Moose on Wednesday morning.

Sportsnet:  Where Patrik Laine fits in among the NHL’s goal scoring elite.  The Jets have quite the special player in the Finnish sniper.

Global News:  Perreault family grateful for care at St. Boniface Hospital.  Integration within the community is an important component for the Jets 2.0.  Good to see the Perreaults giving back in this manner.

Winnipeg Sun:  Hellebuyck sets franchise record for wins in a season in latest Jets victory.  He stood tall for his side last night as he rings up another record for this franchise.  Ken looks at the play of Hellebucyk and breaks down the win over the Devils. 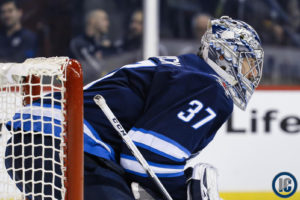 Winnipeg Free Press:  Jets cruising with or without Scheifele.  (Paywall).  Who needs a top centre anymore?  Kidding of course but the Jets depth has shown that they can handle themselves when they are missing key pieces.  Mike breaks down the contest from Newark.

Winnipeg Free Press:  Dump & Chase.  (Paywall).  No Chase for this one so Dump aka Mike McIntyre goes solo for this week’s edition of their online which includes Trash talk, trolls, Turkulainen and more.

NJ .com:  Taylor Hall’s point streak ends in Devils’ loss to Jets.  Read about the game from the perspective of a writer who covers the Jets opposition last night.

Sportsnet:  Patrik Laine impossible to ignore as streaking Jets top Devils.  Twenty points in his last ten games, which includes 14 goals has the Jets sniper just one goal back of Alexander Ovechkin for the league lead.

Sportsnet:  Connor among star NHL rookies flying under the radar.  They really wanted to illustrate that headline by cutting Kyle Connor (for the most part) out of that picture.  As someone who has watched almost all of this NHL and AHL games I’m not really surprised by his play but it is easy to get overlooked when guys like Wheeler, Laine, Scheifele are on your team.