Note:  Another Jets game day as the team gets ready to face the Rangers tonight in the world’s most famous arena aka Madison Square Gardens.  This is the second game of their six-game road trip as they look to keep the Nashville Predators within their sights in top spot in the Central Division.  Yesterday the team practiced in New Jersey and while we don’t anticipate any lineup changes from their last game in Carolina, the Jets pre-game report will bring you up to speed once the team takes to the ice for their morning skate at 10:30 AM CST.  Puck drop in New York is at 6 pm CST.  Stay tuned throughout the day for any and all Jets news and updates via Twitter | Facebook | Instagram.

Note II:  The Moose will hold a practice this morning at 9 am out at the IcePlex before they head out on the road where they will look to continue their success on this seven-game road trip.  The trip begins in Milwaukee on Wednesday.

NHL .com:  Five questions with Patrik Laine.  He’s asked about Jets chances to win the Stanley Cup, atmosphere in Winnipeg for a playoff game, scoring 30 goals as a teenager for two consecutive seasons, living the rock star life in Winnipeg and how long will his beard last? 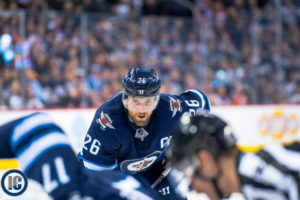 Winnipeg Sun:  Competition for ice time, jobs heating up Jets depth means capable players are sitting out.  It really is quite amazing when you look at this Jets roster compared to ones from when the team first arrived in Winnipeg.

Winnipeg Free Press:  Jets’ forward depth gives Maurice options other coaches don’t have.  (Paywall).  When you have three lines which are as formidable as what the Jets presently have constructed it is certainly an embarrassment of riches for an NHL bench boss.

Winnipeg Free Press:  Healthy Tanev waiting for chance to get back into Jets lineup.  (Paywall).  As players who were having an impact prior to their injury begin to get back to full health they are finding it difficult to crack a Jets lineup that seems to be firing on all cylinders.  The good news for those players who may have tried to get back early from injury is they will likely fully be at 100% when they do crack the lineup again and get a chance to make an impact.

The Hockey News:  Patrik Laine’s still a Rocket long shot, but he’s blasting his way into elite company.  Lots of interesting tidbits in this look at whether the Jets sniper can accomplish this tall task.

Illegal Curve:  Jets Patrik Laine named NHL’s Second Star of the Week.  He is certainly not showing any sophomore jinx as he continues to heat up as the season progresses.

TSN 1290 Winnipeg:  Salary range is $4-6 million for Josh Morrissey.  TSN’s Bob McKenzie joined the Big Show after the weekend to talk NHL including if the league has run it’s course with outdoor games, the Jets honouring Thrasher franchise records, as well as what a Josh Morrissey contract could look like for the pending RFA.