Note:  Fresh off a 3-2 win over the Hurricanes on Sunday to kick off the six-game road trip the Jets are in New Jersey today to practice at the Prudential Center at 12 noon EST.  They will play the Rangers tomorrow night at Madison Square Garden.  The Winnipeg Jets Practice Report will bring you up to speed when the team takes to the ice.

Note II:  The Moose ended an eight-game stretch at home with a 4-3 loss to the Wild which saw them split the weekend series against Iowa and finish it with three wins and five losses.  The team remains in first place in the Western Conference with a 35-16-4-3 record.  They are off today.

Winnipeg Sun:  Laine does it again (and again) in win over Hurricanes.  The Jets sniper is simply on fire with ten goals and six assists in his last eight games. 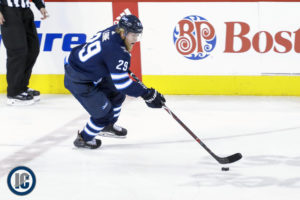 Winnipeg Free Press:  Laine scores twice in 3-2 Jets victory over Hurricanes.  (Paywall).  Back to back games with two goals isn’t too shabby.  Mike breaks it down from Raleigh.

Winnipeg Free Press:  Mason joining Jets today.  (Paywall).  He played with the Moose on Saturday and spent Sunday as a travel day as he gets ready to get going with the big club.

Illegal Curve:  Moose outbattled by Wild in 4-3 loss.  Manitoba had a lead but relinquished it to an Iowa team that is fighting to stay above that playoff line.  Peter recaps the contest.