Note:  The Jets are back in business following a day off on Sunday as they get ready to play a couple of games in Winnipeg ahead of a six-game road trip out east.  The team skates today at 11 am as they prepare to face the Nashville Predators on Tuesday night.  The Jets Practice Report will keep you up to date with the latest news and audio.

Note II:  The Moose managed to split their weekend series with the Wolves with a solid 2-0 win on Saturday which was followed up by a disappointing 5-2 loss on Sunday in their retro uniforms.  The team has today off and will resume skating on Tuesday as they prepare for the final two games of this eight-game home stand when the Iowa Wild roll into town for a Saturday/Sunday pair of games.

Note III:  Today is the final day for trades in the NHL also known as Trade Deadline Day.  Once the clock hits 3 PM eastern time the buzzer sounds on NHL rosters.  Thoughts are the Jets could be adding so keep it locked to illegalcurve.com as well as our social media Twitter | Facebook | Instagram.  Also worth noting that tonight will feature a special Monday edition of NHL This Week with Illegal Curve on TSN 1290 Winnipeg as the guys break down the Trade Deadline Day deals and any Jets moves.  Kicks off at 6 pm.

Note IV:  The Jets have traded for Paul Stastny from the Blues.  For more trade info and reactions click here.

Winnipeg Sun:  Solid marks for all positions for Jets during third quarter.  Ken isn’t a teacher but that didn’t stop him from handing out some grades at this point in the season.

Winnipeg Sun:  Depth moves the likely outcome for Jets.  With most of the big names off the board it isn’t that much of a surprise and the reality is with the way this team has been playing, aside from adding some depth, big moves are unnecessary.

Toronto Sun:  Still plenty of players on market ahead of NHL trade deadline.  Mike wonders if the Jets can resist making a bad move.

Winnipeg Free Press:  Jets sit tight as trade deadline looms.  (Paywall).  Lots of names that have been connected with the Jets are now off the board.  Should make for an interesting day today.

Winnipeg Free Press:  Jets benefit as Buff does more with less.  (Paywall).  He has been really good this season and partnered with Tobias Enstrom has provided the Jets with the type of stability needed when they lost Jacob Trouba. 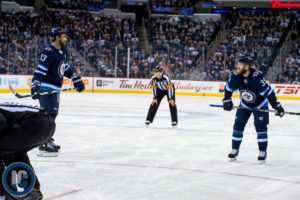 Illegal Curve:  Wolves send the Moose back in time with 5-2 win in retro game.  After two wins the Moose looked like they were ready to put together a streak but an inconsistent effort on Sunday cost them another win.