Note:  The Jets had a busy Thursday which saw them recall Tucker Poolman, take Michael Hutchinson off IR, assign Eric Comrie to the Moose and a host of other news which you can find contained without our Practice Report.  Today the team will have a morning skate in St. Louis at 11:30 am as they prepare to face their division rival Blues at 7 pm.  Stay tuned throughout the day for any and all Jets news and updates via  Twitter | Facebook | Instagram.

Note II:  The Moose took the day off on Thursday after a highly entertaining 6-3 win on Wednesday night over the Admirals which ended with a full melee including a goalie fight.  They will skate this morning at Bell MTS Place as they get ready for a pair of tough afternoon games this weekend against the Wolves.

Winnipeg Sun:  Five keys to Jets vs Blues.  Ken’s big matchup is Bryan Little vs Brayden Schenn. His five keys to the game include: 1) Wheeler is rolling. 2) Laine getting closer. 3) Pick up the PK. 4) Eyes on Tarasenko. 5) Try to solve Hutton. 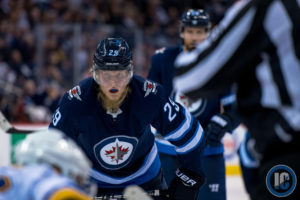 Winnipeg Sun:  Wheeler challenges Trump on gun control.  As per usual the captain gives a solid response when discussing what can be a very hot button issue for our friends south of the border.

Winnipeg Sun:  Hutchinson resumes Jets backup role.  While the Jets list of walking wounded remains long they are finally starting to see it get reduced.

Winnipeg Free Press:  Trading for playoff toughness a mistake Jets GM shouldn’t make.  (Paywall).  Former NHLer turned scribe Scott Campbell with his thoughts on what the Jets should not do when it comes to the trade deadline.

Winnipeg Free Press:  Jets’ American captain challenges Trump on gun violence.  (Paywall).  Quite a lot of thought went into his reply to the questions.

Sportsnet:  Jets could be tinkering at deadline.  John Shannon joins Evanka Osmak to talk about what the Winnipeg Jets could be doing at the deadline.

TSN 1290 Winnipeg:  Hellebuyck should be a Vezina finalist.  TSN’s Jamie McLennan joined the Big Show this morning touching a number of topics including workload fatigue for NHL goalies, what the Jets might search for at the trade deadline as well as where he’d put Connor Hellebuyck in the Vezina voting.

TSN 1290 Winnipeg:  Impossible to ignore trade deadline.  Jets defenceman Josh Morrissey stopped by the Big Show for a chat including his thoughts on the women’s gold medal game at the Olympics, his work in the community, what the team was up to during their 10-game home-stand as well as what it’s like as a player leading up to the trade deadline.

TSN 1290 Winnipeg:  We’re trying to secure our playoff spot.  Coach Pascal Vincent discusses how the Jets injuries have affected the Moose’s roster, the line brawl that ensued after last night’s game and the play of rookies Mason Appleton and Sami Niku.