Note:  Stay tuned to Illegal Curve as we will have all the latest news from the MTS Centre today.  We will have audio from both the Jets & Islanders as well as both coaches.  Should be up by 1 pm.

Winnipeg Free Press:  Kane growing up in the NHL.  Jets fans just want to believe in the young gun and hope that with any maturity comes the extra bonus of more goals.  The belief is Evander can become a 40 goal scorer and but for his concussion we might be witnessing that this season.

Winnipeg Free Press:  Tinkering with the offence.  Looks like Burmistrov is moving on up to another line.  The talented forward will possibly be playing with Kane and Wellwood.  We will know more at today’s practice if Coach Noel is gonna stick with the lines he used yesterday.  As always follow @illegalcurve for the latest news and updates.

Winnipeg Free Press:  Noel’s message received.  If the team wants to have success you need to listen to the message being sent by your coach.  Watching Mercer on the ice with the GST line was quite humourous. 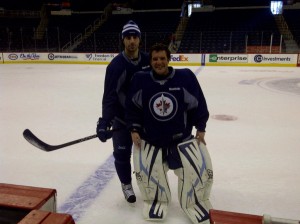 Winnipeg Free Press:  Hockey’s Winnerpeg past hits big screen.  Hopefully in this instance the city is doomed to repeat history and can, like the Winnipeg Victoria’s, win a Stanley Cup.  Sounds like quite an interesting movie project, which had Mark Chipman and Kevin Cheveldayoff attend the premier.

Winnipeg Sun:  Bench too warm for Eric Fehr.  The big winger from Winkler is having one of those season’s to forget.  One cannot help but feel that he is still not 100% after off-season shoulder surgery.

Winnipeg Sun:  Must-win for Jets.  You hate to call a game a must-win, since it seems like every Jets game for the remainder of the season might be so titled, but you cannot afford to lose a game to a team below you in the standings.

Globe and Mail:  Winnipeg can’t get over hump.  The Jets chances jumped courtesy of the Capitals loss to the Sharks.  Even though it shouldn’t be close, the Jets remain in the hunt thanks to the less than stellar play of their Eastern competition.

Winnipeg Free Press:  Jets promote reading.  A worthwhile endevour and a nice reward for the classrooms that won the writing contest.

Globe and Mail:  Noel steers clear of trade deadline frenzy.  As coach Noel often says “I coach the team I have in front of me”.  There is no point in speculating for him as he has to play the hand he has been dealt.

The Telegram:  Multilingual blueliner plays a punishing style.  The hope is that Kulda is one of those prospects that continues to develop and that you might expect to see in a Jets jersey in the next year or so on a regular basis.

Syracuse.com:  Winnipeg had been eyeing Crunch’s Macenauer for awhile.  Interesting to hear he was on the Jets radar since last summer.

Northern Colorado:  Forney returns to Eagles.  He has produced nearly a point per game in the ECHL so far this season.  The Eagles are sitting 4th overall in the Western Conference.

Newsday:  Islanders need to rebound on two-game trip.  Every game is so important, especially as GMs are trying to decide if they are going to be buyers or sellers at the trade deadline.