Note:  The Jets, minus Jacob Trouba and a number of other players, are back in business as they prepare to kick off the first of ten games at home tonight against the best team in the NHL in the Tampa Bay Lightning.  Coach Maurice has stated that Michael Hutchinson will get the start in net despite the fact that he played in the AHL All-Star game last night in Utica, NY and will be traveling today to Winnipeg.  The Jets have morning skate at 10:30 am so we will get some more clarity on the 4th line although with Kyle Connor getting power play time at practice on Monday you can probably expect Marko Dano to be your extra forward.  The Winnipeg Jets pre-game report will have you up to date.  You can also stay tuned via Twitter | Facebook | Instagram.  Puck drop is at 7 pm CST.

Note II:  The Moose are on the final day of their three-day AHL All-Star break as the team gets ready to reconnect in Rockford, Illinois ahead of six more games on the road.  The Moose are 17-4-1 in 22 road games this season and have points in eleven straight on the road (10-0-1).  Friday’s game against the IceHogs will mark the first of 17 straight against the central division.

Winnipeg Sun:  Five keys as Jets begin life without Trouba with first-place Lightning in town.  Ted’s five keys to the game include: 1) Life without Trouba. 2) Injury woes. 3) Best of the best. 4) Home cooking. 5) Getting a rest. And the big matchup is Michael Hutchinson vs. Andrei Vasilevskiy.

Winnipeg Sun:  Trouba injury leaves another big hole, but Jets have weathered storm so far.  It was the Sunday night news broken by the Sun that rocked the city.  Ted writes about the loss of Trouba to this roster. 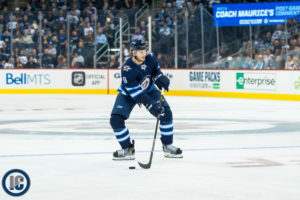 Winnipeg Free Press:  Jets vow to not get complacent during lengthy stretch at Bell MTS Place.  (Paywall).  There has been no place like home this season but you cannot take that for granted when some of the best teams in the NHL are about to make their presence felt.

Winnipeg Free Press:  Laine pumped to play series in his home country. (Paywall).  He is one of the biggest stars in the entire country of Finland and you can expect the folks there to go bananas when their favoured son returns home.

Winnipeg Free Press:  Trouba out of Jets lineup for six-to-eight weeks with ankle injury. (Paywall).  Mike gives his thoughts on the loss to a key piece of the Jets D corp.

Illegal Curve:  Winnipeg Jets Practice Report.  It was an incredibly busy afternoon at Bell MTS Place and our report recaps all of the news with some practice notes, a look at the lines/D pairs, health updates (Trouba, Scheifele, Kulikov, Lowry, Matthias & Mason), as well as audio from Poolman, Morrissey, Myers, Lowry and coach Maurice.

theScore:  How Wheeler’s versatility helped Jets remain a powerhouse in Scheifele’s absence.  The move from wing to centre isn’t as easy as moving from centre to wing, yet the Jets captain has certainly shown he is more than capable since he made the switch.

TSN:  Can the Jets ride their roster heading into the playoffs?  The Jets are sitting pretty in the West, so is there any point in messing with the roster? That’s Hockey discusses.

TSN 1290 Winnipeg:  Jets/Panthers will be a smash hit in Finland.  Finnish NHL correspondent Sami Hoffren joins Andrew Paterson and Rick Ralph on the Afternoon Ride. They discuss the excitement in Finland over next year’s regular season game between the Jets and the Panthers, Jets prospect Kristian Vesalainen’s season, how Joel Armia has flown under the radar, the popularity of the NHL in Finland and the Finnish Olympic hockey team.

TSN 1290 Winnipeg:  Jets likely not adding d-man after Trouba injury.  TSN Hockey Insider Bob McKenzie joined the Big Show this morning to take a look at the Jets which includes their status as a true Stanley Cup contender and what GM Kevin Cheveldayoff could do following the news that Jacob Trouba will miss 6-8 weeks with an ankle injury.