Note:  The Jets have a media availability at 11 am although they won’t skate after having played and won 2-1 in a shootout yesterday afternoon in Calgary.  We will have a pre-game report up at 10:30 am with puck drop at Bell MTS Place at 7 pm.

Note II:  The Moose have hit a skid having lost four of their last five games as they deal with a number of difficulties (Roslovic recall, Sgarbossa suspension and a host of injuries) which manifested itself in a sweep by the Texas Stars of their two games Friday (4-0) and Saturday (5-1).  The team has the day off today. 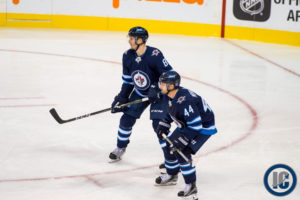 Winnipeg Sun:  “Skol” day for Wheeler.  We’ve seen the Jets captain when he was back home in Minnesota participating and you have to know that he, along with many other Vikings fans here in Manitoba, will be casting their eyes to the scoreboard for updates.

Winnipeg Sun:  Jets grind out two points in Calgary.  The team deserved to leave Alberta with the two points after a solid performance overall.  Paul breaks it all down.

Winnipeg Free Press:  Jets douse Flames in playoff-like contest.  (Paywall).  Considering it seems all the other Central teams won (they didn’t all win but Nasvhille, Dallas, Minnesota and Colorado did, while Chicago & St. Louis lost) the importance of these games, especially sans Mark Scheifele, are huge games for the Jets.

Winnipeg Free Press:  Jets’ PK within striking distance of league’s top tier.  (Paywall).  They definitely seem to be employing a more aggressive penalty kill at this point in the season.

Calgary Herald:  Smith stays hot despite Flames having sizzling streak stopped.  Read about the game from the perspective of a writer who covers the Jets opposition.

TSN:  Jets have all elements you need to have success.  The Jets pulled off a shootout win over the Flames on Saturday and Craig Button says he is impressed with Winnipeg’s attributes and believes the team has what it takes to be very successful.