Note:  The Jets had the day off yesterday but will be back on the ice today at 11 am as they prepare to kick off three straight games at home starting with the Buffalo Sabres on Friday.

Note II:  The Moose hit the ice at 9:30 am at the IcePlex in advance of two back-to-back games on the road in Chicago and Iowa on Friday and Saturday.  There were some moves made yesterday and the Moose Practice Report will bring you up to speed with the latest.

Winnipeg Sun:  Consistency key as Jets continue to roll: Still in top spot in Central at midway.  Ken examines the Jets season as they have now hit the halfway point in their season.

Winnipeg Sun:  Dream comes true for 35-year-old Slater.  While many hockey fans are writing off these upcoming games without NHL players, for many players who are getting their first crack at this opportunity of a lifetime, they are embracing it wholeheartedly.

Winnipeg Free Press:  Dano, Matthias get rewarded for their patience.  (Paywall).  Both players had to deal with quite the wait to get back into some NHL action.

Winnipeg Free Press:  Slater to suit up for Team USA at Olympics tournament.  (Paywall).  Mike caught up with the former member of the GST line to chat about his upcoming opportunity.

Sportsnet:  31 Thoughts.  Just a couple of Winnipeg mentions including #2 (Jets and Hurricanes possibly playing in Finland next season) and #10 (Jets ability to now sign Hellebuyck to new contract). 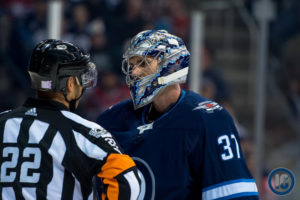 TSN 1290 Winnipeg:  Jets prospects at World Junior Hockey Championship.  Missed this from Tuesday when Mark Seidel of North American Central Scouting joined Andrew Paterson and Rick Ralph on the Afternoon Ride to discuss the World Junior Hockey Championship. They discuss the play of Jets prospects Kristian Vesalainen and Dylan Samberg, the outdoor game at New Era Field, the attendance in Buffalo, and the players that have increased their draft stock.

Illegal Curve:  Moose Practice Report.  A look at the lines used at IcePlex, more on Jansen Harkins reassignment, Comrie back in fold, goalie plan of action, and Beauvillier news.

Winnipeg Free Press:  Hutchinson sensational in Comrie’s absence, but Moose want to develop young goalie.  (Paywall).  A common refrain we always hear from coach Vincent is about development of players to eventually play for the Winnipeg Jets.

Winnipeg Free Press:  Rookie Harkins sent to ECHL for seasoning.  (Paywall).  When I noted his absence from practice yesterday my initial assumption was he was injured.  When we spoke to the coaching staff following skate it was confirmed that this was more about getting the young forward more ice time in the short term.