Note:  The Jets face the Islanders tonight with the daunting news that they’ve lost Mark Scheifele for 6-8 weeks.  In his stead the Jets have shifted Blake Wheeler to centre and moved Mathieu Perreault to the second line.  Check out the Winnipeg Jets pre-game report for news ahead of tonigth’s game against the Islanders.

Note II:  The Moose got back to business with a practice on Thursday evening following their holiday break.  The team is set to practice again today ahead of two afternoon games against the Barracuda this weekend at Bell MTS Place.

Winnipeg Sun:  Five keys to Jets vs Islanders. Ken’s big matchup includes Blake Wheeler vs John Tavares and his five keys include: 1) One man Armia. 2) Heating up. 3) Power up. 4) Rookie rolling. 5) Welcome back. 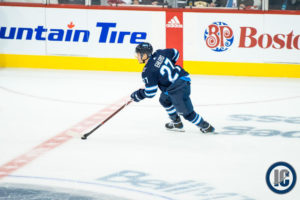 Winnipeg Sun:  Scheifele out six-to-eight weeks: Wheeler moves to centre, Perreault gets a promotion.  Plenty of reaction from inside the Jets dressing room to the loss of Scheifele.

Winnipeg Sun:  Byfuglien trending closer to return.  With the bad news about 55 at least there was some positive health news about 33.

Winnipeg Free Press:  Plenty of bumps in the road, but it’s home, spectacular home for Jets.  (Paywall).  The Jets have made the home cooking very evident this season as Bell MTS Place has been very kind to the home side.

The Hockey News:  Losing Scheifele a huge blow to Jets, but don’t count Winnipeg out just yet.  While losing your top centre for that long definitely hurts this team has the depth to possibly mitigate this disaster.

TSN 1290 Winnipeg:  Jets have depth to handle Scheifele injury.  Mike Kelly discusses how Mark Scheifele’s injury will effect the Jets lineup and which players will have to step up in his absence.

TSN 1290 Winnipeg:  Maurice will continue to tinker with the lines.  Tim Campbell of NHL.com joined the Afternoon Ride with Andrew Paterson and Rick Ralph. They discuss Mark Scheifele’s injury, Black Wheeler’s move to centre and a number of possible lineup changes that might happen while Scheifele remains on IR.