Note:  Kick start your day with two hours of the Illegal Curve Hockey Show starting at 7 am for the latest Winnipeg Jets, Manitoba Moose and NHL talk on TSN 1290 Winnipeg.

Note II:  The Jets are playing in their final game before the Christmas break as they complete their three-game road trip in Brooklyn with a 12 noon CST puck drop against the Islanders.  Obviously no pre-game skate today but yesterday during media availability coach Maurice indicated that Steve Mason would start.

Winnipeg Sun:  Jets will turn to Mason as they look for one more win before Christmas.  His play has definitely picked up since the opening of the season.  Now it will be important for the team to help support him with some goals.

Winnipeg Sun:  Cautious Cheveldayoff likes what he sees in Jets, won’t take anything for granted.  When you have a team that hasn’t been to the promised land you cannot get too far ahead of yourself.

Winnipeg Free Press:  Jets getting the most out of Perreault in limited time.  (Paywall).  He is dynamic and he is certainly gonna be fresh this season considering his minutes this season.

Winnipeg Free Press:  Veteran Bryan Little enjoying riding shotgun with Jets’ young guns.  (Paywall).  It isn’t easy to ask a veteran to adopt a different role or to take on my defensive responsibility but that is exactly what has been asked of the versatile vet and he continues to deliver. 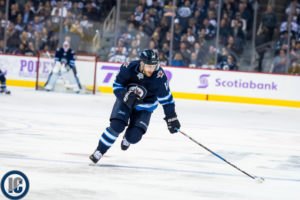 Winnipeg Free Press:  Jets’ shootout curse continues.  (Paywall).  The good news is you are getting at least a single point and additionally there is no shootout in the playoffs.  However, it would be nice for the team to start getting both points in these types of games.

Newsday:  Tavares-Bailey-Lee line is the Islanders’ bright spot.  Check out the Jets opposition from a beat writer that covers the Islanders.

Illegal Curve:  Moose show there is Gnome place like home with 3-1 win over Rampage.  Peter gives you some insight, a look at the lineup, a scoring summary, post-game audio (Schilling, De Leo and coach) and what’s next.

Winnipeg Free Press:  Moose merry heading into Christmas break.  (Paywall).  If Mike and I are gonna be able to make bad puns all season long it is going to be an excellent year.  He also breaks down the game for you with his column from the Bell MTS Place.