All the latest Winnipeg Jets and Manitoba Moose news and audio.

Note:  The Jets welcome division rival Chicago to town as they wrap up this two-game homestand at Bell MTS Place.  Winnipeg hits the ice for morning skate at 10:30 am.  As always keep it locked to illegalcurve.com for pre and post game news and be sure to follow us on social media including Twitter | Facebook | Instagram.

Note II:  The Moose travel today to southern Ontario as they prepare for three games in three days starting with the Belleville Senators at Yardmen Arena on Friday night.  They then have a battle of the two top teams in the AHL when they take on the Marlies in a pair of back-to-back games on Saturday and Sunday.

Winnipeg Sun:  Jets gameday vs Blackhawks.  Paul’s big matchup is Star power vs star power. His keys to the game are: 1) Fourth-line power. 2) Shut ’em down. 3) Get that first one. 4) Lead through 40. 5) Don’t work overtime.

Winnipeg Sun:  Perreault “couldn’t be happier”.  When an athlete says something like this you could take it with a grain of salt but Perreault is very forthright and completely unsurprising that he is putting the team success ahead of his own.

Winnipeg Sun:  Jets gear up for healthy dose of division.  While they have had success against the Central this is going to be a big test when you face the Hawks, the Blues (twice) and then finish off with the Predators.

Winnipeg Free Press:  Dano sits and waits in hockey’s no man’s land.  (Paywall).  Cannot be easy for a hockey player to have to sit from above and watch as a passenger but with the way the team is going that is likely what will happen with the former 1st round pick. 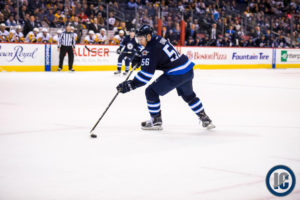 Winnipeg Free Press:  Jets goalie Mason cleared to play.  (Paywall).  The slow approach worked to get him back into shape and the team will have need of his services this week when they go back-to-back against the Blues.

The Athletic:  Significant changes to Connor Hellebuyck’s game are paying off.  (Paywall).  It has been well documented that since his off season modifications the Jets number one goalie has certainly seen an elevation in his game.

Global News:  Jets land at Children’s Hospital for annual holiday visit.  Great way to use their fame to help make the day of children who are dealing with serious health concerns.

Illegal Curve:  Winnipeg Jets Practice Report.  A look at what was happening at Bell MTS Place yesterday.  Includes a look at the lines and audio from Blake Wheeler, Mathieu Perreault and coach Maurice.

TSN:  Is Nikolaj Ehlers getting lost in the shuffle?   The guys on That’s Hockey share their thoughts on him flying under the radar.

TSN 1290 Winnipeg:  No need for Jets to juggle lines.  TSN 1290 Jets broadcaster Brian Munz joins Kevin Olszewski and discusses what the Jets are working on during a rare practice, how the Chiarot/Poolman pairing performed in their first game together, how the top four defencemen handled more minutes, potential defensive call ups, and the forward lines remaining together.

TSN 1290 Winnipeg:  We felt we were moving forward every year.  Moose Head Coach Pascal Vincent speaks with Andrew Paterson and Rick Ralph about how the organization’s success has been a result of 7 years of hard work, the team’s road trip to California, the upcoming games vs. Toronto, the play of Mason Appleton & Sami Niku and the goaltending performances from Michael Hutchinson and Eric Comrie.

London Free Press:  Lucky meeting left big mark on Stanley.  Catch up with the other Jets first rounder from 2016 as he turns his sights on to the World Juniors.