Note:  The Jets have stumbled on this three-game road trip dropping their second straight game last night.  It was a tough 6-4 loss in Sunrise and they will have a practice today in Tampa to try and turn things around.  They hit the ice at 11 am CST.

Note II:  The Moose change venues today as they will practice at Bell MTS Place ahead of a pair of matinee games this weekend in Winnipeg.  They welcome central division rival Milwaukee who trail Manitoba by 13 points (or the less fun 0.227% points percentage).  This weekend also provides some back-to-back fun with the Teddy Bear Toss on Saturday and Star Wars game on Sunday.

Winnipeg Sun:  Make it consecutive regulation losses for first time since early October.  Hasn’t happened in awhile and I suspect will leave a foul taste in the mouths of the Jets players as they make their way from Sunrise to Tampa.  Ken breaks down the game.

Winnipeg Free Press:  Third line excelling despite goal drought.  (Paywall).  Ironic for Jason’s headline the Jets third line scored last night but the point is well made from the praise that line has received from the coaching staff. 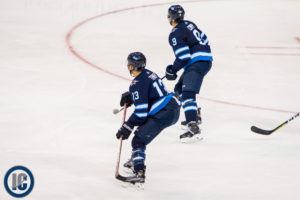 Winnipeg Free Press:  Jets fall to Florida 6-4 for second-straight loss of road trip.  (Paywall).  Jason was inside the BB&T Center last night and recaps the action for you with this article.

Winnipeg Free Press:  Leadership takes many forms on a hockey team.  (Paywall).  The tendency to focus on 4th line guys in Canadian markets just exemplifies how passionate these markets can be about their local hockey teams.  Former NHLer turned scribe Scott Campbell delves further into this topic.

The Athletic Winnipeg:  How, when, and why the Winnipeg Jets became worthy of their record.  (Paywall).  Murat goes into the weeds to determine the above and you can click the link below (if you aren’t a member of The Athletic) to listen to his chat with Hustler and Rick.

TSN 1290 Winnipeg:  Jets well worthy of their record.  Murat Ates, hockey writer at The Athletic joins the Afternoon Ride and discusses on if the Jets’ record is sustainable despite underwhelming advanced stats, the difference Mathieu Perreault’s return as made metrics-wise, the shot share from the bottom six giving the Jets a competitive advantage, why the Tanev/Copp/Lowry line is a “revelation” for Winnipeg, and the importance of goal differential in assessing a team’s long-term performance.

TSN 1290 Winnipeg:  Wheeler’s supporting cast is the best he’s ever had.  Scott Cullen of TSN.ca’s speaks with Kevin Olszewski about Blake Wheeler’s point production exceeding expectations, the Jets’ forward depth, how Kyle Connor has adapted to playing with Wheeler and Mark Scheifele, Patrik Laine’s shot, and Eric Comrie set to make his first start of the season against Florida.

Illegal Curve:  Post-game report.  Head back inside the BB&T Center for a recap, some notable numbers and post-game audio from Blake Wheeler, Eric Comrie, Patrik Laine and coach Maurice.

TSN 1290 Winnipeg:  Time and effort leading to results for Moose.  I joined Hustler to chat about the turnaround of the Manitoba Moose, their nine game winning streak and chase to tie the franchise record of ten straight, the importance of veteran players Michael Sgarbossa and Buddy Robinson, why head coach Pascal Vincent continually mixes and matches his lines, Manitoba’s super-hot Twitter game, and our top-five favourite “goal GIFs” the Moose tweet out after every goal.