Note:  The Jets kicked off this three-game road trip with a 5-1 defeat at the hands of the Red Wings in Detroit.  The team will have a day off today in Florida before they hit the ice again on Thursday to face the Florida Panthers.

Note II:  The Moose are set to visit Siloam Mission this morning.  They will volunteer in the kitchen, assist in the preparation of the food and serving breakfast for over 500 people.

Winnipeg Sun:  Tanev filling his role.  Ken writes about the role the forward has carved out for himself with the Jets.  He also writes about the Michigan connections, gives a Steve Mason update and Dylan Samberg. 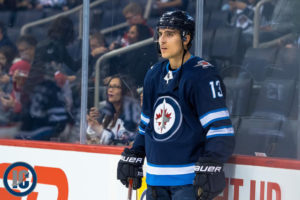 Winnipeg Free Press:  Winnipeg humbled by determined Detroit squad with 5-1 loss.  (Paywall).  Jason breaks down the game in this recap.

TSN:  Jets dynamic duo.  (video).  Blake Wheeler and Mark Scheifele have been fueling the Jets’ offence and their flight to the top spot in the West. SportsCentre takes a closer look at the impressive numbers the Jets’ stars have been putting up.

Illegal Curve:  Post-game report.  Head back inside Little Caesars Arena in Detroit for a recap of the game, some notable numbers and post-game audio from Blake Wheeler, Dmitry Kulikov and coach Maurice.

TSN 1290 Winnipeg:  Jets D strong even without Enstrom.  Ken Wiebe of the Winnipeg Sun on a variety of Jets topics, including the connections of many of Winnipeg’s players to Michigan, when Eric Comrie will get a start – if at all, the Jets’ mindset going into the road trip, Kyle Connor’s quick return from injury and play of the defense without Toby Enstrom.