Note:  The Jets ended a successful three-game home stand (3-0) and are now in Nashville to take on the Predators tonight in the first of four on the road.  Morning skate is at 11:30 am at Bridgestone Arena.  The Winnipeg Jets pre-game report will get you fully up-to-date for tonight’s 7 pm puck drop.

Note II:  Some big news for the Jets on Sunday was that Tobias Enstrom is expected to miss 8 weeks after he sustained an injury in 2nd period of Devils game, Tucker Poolman was recalled from the Moose and Radko Gudas got a 10 game suspension for his slash to Mathieu Perreault’s head.

Note III:  Just like the parent club the Moose are also rolling having won three straight at Bell MTS Place and seven of last eight including a 5-2 win over Laval on Sunday.  They will practice today at Bell MTS Place at 11 am as they get ready for tomorrow’s final game of four when they have a re-match against Laval.

Winnipeg Sun:  Five keys to Jets vs. Predators.  Preview setting you up for tonight’s game between the two central division rivals.

Winnipeg Sun:  Injury to Enstrom opens door for Chiarot and Poolman.  There has been a lot of talk about internal competition within the franchise and this does allow for that opportunity. 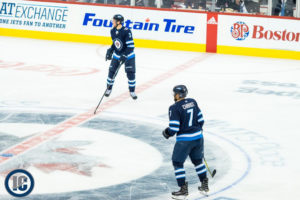 Winnipeg Free Press:  Poolman joins Jets on the road.  (Paywall).  Poolman has kept himself ready for this opportunity playing well for the Moose, despite the fact that he was quite sick during the California road trip.  He kept pushing himself to play big minutes for this team.  Now he may get a chance to continue his development.

Jets official site:  The Evolution of Jacob Trouba.  The Jets D man never truly discovered his talents in hockey and the direction it would take him until his mid-to-late teens.

Ottawa Sun:  No shortage of trade talk as NHL hits quarter mark of season.  According to Bruce’s big Sunday column in his Rumours Du Jour section Jets are willing to listen to offers on players like Matthias, Armia, Copp but while teams are interested in Trouba, the Jets aren’t interested in trading their top defenceman.

Illegal Curve:  Laval Rocket fail to launch as Moose win 5-2.  Peter breaks down the contest including a recap, a look at the reconfigured lineup, scoring summary, player stats and post-game interviews.