Note:  The Jets picked up a big 4-1 win last night over the Coyotes in front of plenty of happy Jets fans in Glendale, Arizona.  The win ensured they finished their three game road trip with two wins and one loss.  The team travels today and will return to practice on Monday as they prepare for a three game home stand, which begins with a re-match between the Jets and Coyotes on Tuesday night.

Note II:  The Moose are really rolling in California as they picked up their fourth straight win.  They conclude the road trip this afternoon in San Jose as they look to pick up their second win over the Barracuda, after a 5-2 win on Saturday afternoon at SAP Arena.  Puck drop is at 5 pm CST.  Jack Roslovic is on quite the roll having picked up points in five consecutive games (10 pts – 4 G 6A) including his first multi goal game as a pro.

Winnipeg Sun:  Scheifele, Wheeler lead way in Jets comeback win.  Both players rebounded from a Friday night game against Vegas that they weren’t happy with and turned things around in the desert.

Winnipeg Free Press:  Jets slap leash on Desert Dogs.  (Paywall).  It didn’t look good to start but eventually the Jets were able to get into the contest and take home the two points.  Mike breaks it down from Glendale. 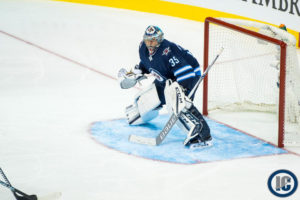 Arizona Republic:  Lack of consistency dooms Coyotes in fourth straight defeat.  Read about the contest from the perspective of a writer that covers the Coyotes.

Sportsnet:  Scheifele scores 100th career goal as Jets beat Coyotes.  And what a goal it was from the Jets top centre.

The Athletic Winnipeg:  76-goal rookie season was just a glimpse into greatness to come for Selanne.  (Paywall). No question that the Finnish Flash rookie season was one we here in Winnipeg will be talking about forever and ever.  Have to love reading about it from a writer like Eric Duhatschek.

Illegal Curve:  Post-game report.  Head back inside Gila River Arena to read the recap and get an update from Coach Maurice.

Topics: Jets/Golden Knights recap.  Jets/Coyotes preview.  A look at the Jets 2nd line of Nikolaj Ehlers, Bryan Little and Patrik Laine.  A look back at the career of Dale Hawerchuk ahead of his induction into the Jets Hall of Fame.

Topics:  Confusion surrounding goalie interference in the NHL.  The lethal combination of Stamkos and Kucherov for the Tampa Bay Lightning.  Reflections on the 2017 Hockey Hall of Fame draft class ahead of the induction ceremony.