Note:  Yesterday the Jets practice was at the Golden Knights practice facility where they held a spirited skate and we got an update on Mathieu Perreault.  Today, the Jets have another day of practice in the desert although it will be at T-Mobile Arena.  The Winnipeg Jets Practice Report has been updated with the latest news from Vegas.

Note II:  The Moose have certainly turned things around in California.  They began this six game road trip with a loss in Bakersfield but have since won three straight games including a 4-1 defeat of the Heat (Flames farm team) last night.  The team has the day off today as they make their way to San Jose to close out the road trip with a pair of games against the Barracuda.  Jack Roslovic picked up a goal and two assists which gives the prospect 14 points in 13 games and has him 6th overall in AHL scoring.

The Coaches Site:  From Behind the Bench – Stay Sincere by Todd Woodcroft.  Bit of insight into one of the assistant coaches who stands on the Jets bench to ply his craft.

Winnipeg Sun:  Connor making his minutes count.  He has certainly made the most of his opportunity to play with the big club.  Ken also writes about Patrik Laine finding his stride, Laine asking Ehlers a question in the media scrum and how Vegas has had success with all the goalie injuries. 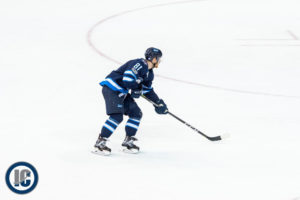 Winnipeg Free Press:  Jets get back to business.  (Paywall).  May be a tad hard to focus on hockey when you are experiencing the bright lights of Vegas for the first time but the Jets know they can’t afford to have a letdown this weekend.  Mike provides this update from Sin City.

Winnipeg Free Press:  Connor taking advantage of prime time with NHL club.  (Paywall).  Coach Maurice spoke earlier this season about taking players from where they were playing in the AHL and having them slot into the NHL, as opposed to sticking a kid like Kyle Connor on the 4th line when he was 1st line in the minors and clearly it has seemed to work for the young prospect.

Winnipeg Free Press:  Prospect still has room for improvement.  (Paywall).  Mike takes a look at the Jets 2016 5th round pick Jordy Stallard in this piece.

Sportsnet:  Jets’ goalie competition ‘a healthy situation’.  GM Kevin Cheveldayoff was on Prime Time Sports to chat about the Jets and the play of Steve Mason and Connor Hellebuyck.

The Hockey News:  Hellebuyck’s great start shows he could be Jets’ answer in net after all.  Perhaps the rumours of his demise (as a number one netminder) were greatly exaggerated.  The young goalie certainly accepted the challenge this offseason and hasn’t looked back.

Sportsnet:  Wheeler, Hellebuyck driving forces for Jets hot stretch.  Jets general manager Kevin Cheveldayoff joins Prime Time Sports to talk about whether he second guesses himself in terms of decisions he makes for the team and the competition between the pipes.

TSN 1290 Winnipeg:  Recap of the Jets first month.  Darren Dreger spends the last minute of his chat with the guys talking about the Jets.  Starts at 6:26 minute mark.