Note:  The Jets are off today as they spend the next four days in Vegas culminating in a Friday night date with the Golden Knights.  Winnipeg ended their seven games in 12 days with a 4-1 win last night in Dallas maintaining a perfect 4/4 record in the central division.  Since their opening the season with losses to Toronto and Calgary the Jets have gone 8-1-3 and sit second in the central division behind the Blues with an 8-3-3 record.

Note II:  The Moose are practicing this afternoon as they are preparing to face the Condors tomorrow night.

TheScore:  3 reasons why the Jets are one of the NHL’s hottest clubs.  As you’d expect the focus is on: 1) Wheeler & Scheifele. 2) Hellebuyck. 3) Healthy D core.

Winnipeg Sun:  Wheeler’s dealin’ with four assists in Jets’ win over Stars.  The captain clearly has his eye on the prize as he brushes off talk of individual success to maintain his focus on the collective team goal. 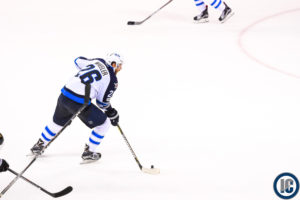 Winnipeg Sun:  Little laments occasional over passing.  With those two linemates he can be forgiven for dishing off the puck as much as he does although with his nose for the net, Little has shown in the past that he knows when to shoot.

Winnipeg Free Press:  Winnipeg comes up big in Dallas.  Mike recaps the game from inside the American Airlines Center.

Winnipeg Free Press:  Coach not worried about Little not putting up big numbers.  (Paywall).  When the first line is putting up such gaudy numbers it isn’t a surprise that the rest of the lines somewhat pale in comparison but the truth is that the second line continues to chug along.

Dallas Morning News:  Stars again can’t find answer against Jets.  Read about the game from the perspective of someone who covers the Stars.

TSN:  Jets come out firing in emotional win.  (Video).  The Jets and Stars were both ready to go at puck drop, and it was Winnipeg who came out firing. Jamie McLennan explains how the Jets’ emotional level, and play by Connor Hellebuyck carried the team to victory.

Sportsnet:  Tyler Seguin wins Round 4 of rock-paper-scissors with Mark Scheifele.  (Video).  I said it the other day but I suspect we will see some sort of summer charity event between these two.

Herald Sports:  Former Moosehead Ehlers’ star rises with Jets.  Dan is the play-by-play voice of the Montreal Canadiens on TSN 690 and used to cover Ehlers in Jr.  He caught up with the Jets winger when the Habs were in the city this past weekend.