Note:  The Jets held off ice workouts on Sunday but did have a media availability which we covered in our Winnipeg Jets Practice Report.  We learned that Adam Lowry is probable to return to the lineup for the first time since mid October although you will have to stay tuned to the Winnipeg Jets pre-game report to find our who is coming out.

Note II:  The Moose are back on the ice for practice today as they prepare for a re-match with the Stockton Heat on Wednesday.  They beat the Heat last Friday 4-1 and then beat the Condors on Saturday night.  This is the fourth of six games the team is playing on the road in California.

Winnipeg Free Press:  Hendricks has troops’ backs.  (Paywall).  A great initiative that helps to give back to those who make a big sacrifice for our community.

Winnipeg Sun:  Jets look to down Stars.  Ken looks ahead to tonight’s contest and gives you some of his thoughts about what is key for Winnipeg as they face Dallas.

Winnipeg Sun:  Jets young blue-liners embrace Operation Shutdown.  They have formed quite the dynamic duo for the Jets. 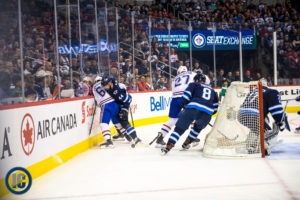 TSN:  Hockey’s Top 10 Storylines of the Week.  Jets are mentioned as one of the top stories.

Illegal Curve:  Winnipeg Jets Practice Report.  The Jets didn’t hit the ice yesterday but there was a media availability.  We have a health update (Lowry & Perreault) as well as audio from Bryan Little and Josh Morrissey.

Topics: Jets week in review, Are the Jets relying too much on the stellar goaltending of Connor Hellebuyck, Previewing the Jets/Canadiens,  How the Jets lines could change with Adam Lowry and Mathieu Perreault back in the lineup