Note:  The Jets are in Minnesota to take on the Wild tonight for a one game road trip, which is just their second central division game of the season.  Coincidentally it is also a re-match for these two teams after the Jets beat the Wild 4-3 back in Winnipeg on October 20th.  Morning skate is at 11:30 am and we will bring you up to speed with our Winnipeg Jets pre-game report.  Update:  Check out all the latest that happened in our Jets pre-game report.  Click here.

Winnipeg Sun:  More ups than downs for Jets after slow start.  After the first couple of games fans in this town were a smidge concerned but things have quieted down from those who were ready to raise up the pitchforks.

Winnipeg Free Press:  Laine says piling up points takes back seat to contributing to wins for Jets. (Paywall).  Even when the rookie was ripping up the league last season he tended to talk more about team wins than individual point production.

The Athletic Winnipeg:  How Connor Hellebuyck re-wired his brain to get better in goal.  (Paywall).  Suspect a number of young goalies who are hoping to take their game to the next level may be looking out west after they see the success the Jets young netminder is having so far this season. 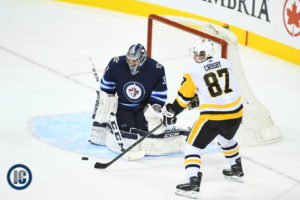 Ottawa Sun:  Garrioch’s Sunday Column.  Missed this one on Sunday.  Garrioch goes around the NHL in his Sunday column and mentions that that Jets GM Kevin Cheveldayoff is listening to offers on his surplus of forwards.

TSN 1290 Winnipeg:  Jets are competing every night.  Ken Wiebe of the Winnipeg Sun looks back on the Jets 7-1 blowout win vs. Pittsburgh.

TSN 1290 Winnipeg:  We have the talent to get into the playoffs.  Moose forward Buddy Robinson joins Kevin Olszewski and discusses the first month of the AHL season.