Note:  Kick off your Saturday morning with three hours of Winnipeg Jets and NHL hockey talk with the Illegal Curve Hockey Show on TSN 1290 Winnipeg.  Show starts at 9 am.

Note II:  The Jets are off today following a pair of back-to-back games in Pittsburgh and Columbus.  The team lost 2-1 on Friday and returned home with two of a possible four points.  The team is back in action on Sunday when the defending Stanley Cup champion Pittsburgh Penguins roll into the city for a 6 pm game.

Note III:  The Moose are back in action after last night’s game which saw them lose in a shootout 4-3 against Belleville.  The re-match starts at 7 pm and will see me getting my first colour broadcast of the season as I join play-by-play voice of the Manitoba Moose, Mitch Peacock in the box.

Winnipeg Sun:  Mason shines but Jets offence disappears in OT loss to Blue Jackets.  While the Jets would have liked an extra point or two on this trip the fact is late in the season when you’re fighting for a playoff spot these mid-season points are gonna come in handy.

Winnipeg Free Press:  Despite OT loss, Steve Mason shows top form after dismal start to season.  (Paywall).  While it isn’t fun accepting moral victories, it was important for Steve Mason to play well when given the opportunity.  Mike provides this recap from Columbus.

Columbus Dispatch:  Jackets make Jets pay for poor power play.  (Registration required).  Not much power in the Jets power play and it hurt them last night.  Read about the game from someone who covers the Blue Jackets.

The Athletic Columbus:  Given a chance to shine, Josh Anderson gives Blue Jackets an OT win.  (Paywall).  Another recap of last night’s game in Ohio.

The Hockey News:  Ehlers takes his best shot – and it’s paying off early for the Jets.  Plenty to like from his game as he continues to develop into a well rounded hockey player. 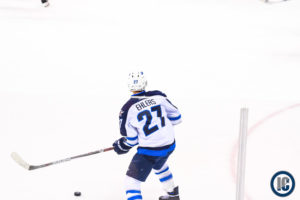 Sportsnet:  Hellebuyck the answer for Jets.  One of the four things they learned was that the Jets young netminder could be the solution for one of the team’s biggest problems.

Illegal Curve:  Moose comeback bid falls short, fall 4-3 in shootout to Senators.  Peter gives you his game notes, the shootout results, a look at the lineup, some player notes and post-game audio from Buddy Robinson, Mason Appleton and coach Vincent.

Winnipeg Free Press:  The Hamburglar foils Manitoba squad.  (Paywall).  He made a number of spectacular saves in last night’s contest.  Mike breaks it down.