Note:  No rest for the wicked as the Jets, after dropping a 2-1 decision in OT last night in Pittsburgh, are now in Columbus where they will take on the Blue Jackets tonight.  No morning skate for either team so we won’t know if there will be any line changes or who starts in net.  Stay tuned to find out.  Puck drops at 6 pm.

Note II:  The Moose are back in action tonight in downtown Winnipeg as they put their two-game winning streak on the line as they face Belleville for the first time.  Puck drops at 7 pm.

Winnipeg Sun:  Hellebuyck hard on himself after Kessel’s overtime winner sinks Jets.  If not for his play last night the score could easily have been a blow out.  But goalies tend to be perfectionists who believe they should stop every puck so his post-game response isn’t a surprise.  Ted recaps the game.

Winnipeg Free Press:  Jets come close, but can’t end winless streak in Pittsburgh.  (Paywall).  The combined record of the Jets/Thrashers franchise in the Steel city isn’t one to write home about.  While the team could have left with two points they failed to do so for the umpteenth time.

Winnipeg Free Press:  Laine waiting to reap his training rewards.  (Paywall).  It isn’t easy for players in their sophomore season as the league and coaching staffs specifically figure out ways to offset your skills.  That is why it is incumbent on young players to continue to work on their game, and evolve it to stay one step ahead of the competition. 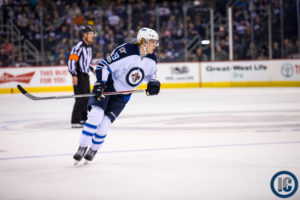 TSN:  Despite the loss, Hellebuyck shows he’s the key to Jets’ success.  Despite their overtime loss to the Penguins, Craig Button says that Jets goalie Connor Hellebuyck has been the key to their success, and explains what Kyle Connor brings to Winnipeg’s top line.

TSN 1290 Winnipeg:  Poor penalty killing continues to hurt the Jets.  NHL analyst Mike Kelly discusses the Winnipeg Jets start to the season and what is hurting them so far.