Note:  The Jets lost a tough game to a very good Blue Jackets squad by a final score of 5-2 last night.  The team will have a couple of days to practice before they finish their three game home stand against the Wild here on Friday night.  The Jets are scheduled to hit the ice for practice at 12 noon at the IcePlex.

Note II:  The Moose have their final day of practice in the city as they prepare to depart on a three game road trip which begins in Iowa.  The team is scheduled to practice at the IcePlex at 10 am.

Note III:  The Jets held practice at the IcePlex today.  Get caught up with the latest news here.

Winnipeg Sun:  Jets streak ends.  It was a big flame out from the home side as they lost for the first time in four games.  Ken breaks it down in this recap. 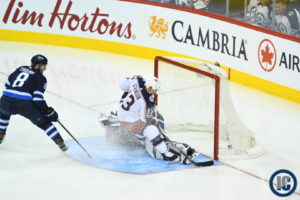 Winnipeg Sun:  Armia gets unwanted wake-up call.  While I didn’t think the Jets had a particularly good game last night, Joel Armia played well with the limited ice time he was given by the Jets bench boss.  The shorthanded goal he scored, while too little too late, was quite a nice one.

Winnipeg Free Press:  Jets lose 5-2 to stingy Blue Jackets in lacklustre affair.  (Paywall).  It was a less than stellar game for the home side as they saw their three game win streak go up in smoke.  Jason breaks it all down for you.

Winnipeg Free Press:  Too soon for Lemieux.  (Paywall).  He earned his first NHL recall yesterday courtesy of his play for the Moose to start the season.  The team required insurance as they had a player who was experienced a spasm earlier in the morning.

TSN:  Mason continues to struggle in net for the Jets.  Having given up 16 goals in his first three starts with the Jets, Jamie McLennan explains what went wrong for the netminder against the Blue Jackets.

TSN 1290 Winnipeg:  Ehlers maturing into a fantastic offensive player.  Ryan Kennedy of The Hockey News joined Kevin Olszewski on the Donvito Roundtable. They discussed if Nikolaj Ehlers is getting appropriate league-wide recognition, Kyle Connor’s call up to the Winnipeg Jets.