Note:  The Jets pulled off their third straight win last night defeating the Hurricanes 2-1 to kick start a three-game home stand.  The team was originally scheduled to practice today but have subsequently cancelled so we won’t get an update on Mathieu Perreault and Dmitry Kulikov who both left the game early until Monday at the earliest.

Note II:  The Moose are back in business today as they look for revenge this afternoon against the Monsters who beat them on Friday night in the home opener.  Puck drops at 2 pm at Bell MTS Place.

Winnipeg Sun:  Jets’ winning streak hits three.  Nikolaj Ehlers continues to fly picking up his fifth goal of the season as he flew around the ice, creating the opportunity for the chance he was set up for by captain Blake Wheeler.  Ken breaks it all down. 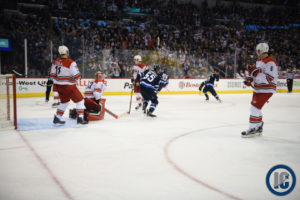 Winnipeg Sun:  Byfuglien a “force” in return to Jets lineup.  Big 33 was back in the lineup as they Jets pulled off the win and Ken gives you his thoughts on the return.

Winnipeg Free Press:  Home-ice victory for Jets makes it three in a row after shaky start to season.  (Paywall).  While it wasn’t the best start to the season for Winnipeg things seemed to have turned around.  Mike breaks it all down in this game recap.

Winnipeg Free Press:  Rookie leaves good impression early in the season.  (Paywall).  Mike wrote about the play of Tucker Poolman who is quickly solidifying his spot on the Jets.

TSN:  Ehlers helping Jets with early-season turnaround.  (Video).  With five goals in five games for the Jets, Nikolaj Ehlers has been an integral part of Winnipeg’s offence. Jamie McLennan takes a closer look at his game-winning goal against the Hurricanes.

Topics:  Surprising starts to the 2017’18 NHL Regular Season, Eight “Off the Wall” Ways to Improve the Game, Alex Galchenyuk continues to struggle in Montreal.