Note:  The Jets have won two straight as they concluded their three-game road trip in Vancouver with a 4-2 victory over the Canucks.  The team will return to Winnipeg today and will not have any media availability until they hit the ice for morning skate tomorrow.  They play three straight at home starting Saturday night with the Carolina Hurricanes.

Note II:  You won’t be bereft of hockey however as the Manitoba Moose play their home opener tonight as they welcome the Cleveland Monsters to town for a pair of games.  Puck drops at Bell MTS Place at 7 pm this evening.

Winnipeg Sun:  Hellebuyck stands tall in Jets win.  Back to back solid starts for the Jets netminder.  Ken breaks it all down from Vancouver. 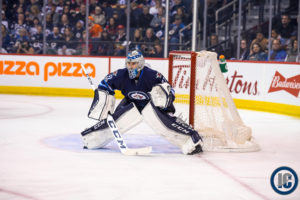 Winnipeg Sun:  Poolman takes long road to NHL.  Lots of talk about the play of the 24 year old rookie who has seamlessly transitioned to the NHL.

Winnipeg Free Press:  Jets heading for home after 4-2 win over Canucks.  (Paywall).  Jason was at Rogers Place last night and gives you his thoughts on the contest.

Winnipeg Free Press:  Brothers battle on and off the ice.  (Paywall).  A look at the battle between the Tanev brothers.

The Province:  Like the Canucks, Jets banking on youth to come of age.  Folks over on the west coast know that patience isn’t easy but necessary.

TSN 1290 Winnipeg:  Maurice under pressure from own expectations.  TSN Hockey analyst Dave Poulin joined the Afternoon Ride to discuss how the early games in an NHL season are tough on coaches as they try to evaluate their teams. Poulin also says that Winnipeg Jets head coach Paul Maurice is under presser from himself first, knowing what sort of team he has. Poulin continues to say that, if Maurice is able to solidify the Jets goaltending, that’s one big goal completed for the organization.

Sportsnet:  Tape to Tape NHL Broadcast.  The guys look at some early season trends after the first week of play and specifically about the Jets starting goalies which begins at the 22:20 minute mark and runs to 26:47.

TSN 1290 Winnipeg:  We want to get back to the playoffs.  Moose forward Chase De Leo discusses the upcoming home opener vs. the Cleveland Monsters.