Note:  The team was back on the ice yesterday for practice in Vancouver and our Practice Report gives you a  look at the lines, D pairs, power play units, a health update and audio from Connor Hellebuyck, Mark Scheifele and coach Maurice.  Click here.

Note II:  The Jets will hit the ice for their morning skate and we will have your projected Jets lines along with pre-game audio.  Puck drops at 9 pm CT at Rogers Arena.  Keep it locked to illegalcurve.com and on social media including Twitter| Facebook | Instagram for all the latest pre and post game news.  Update: Check out the projected lines, D pairs, Hellebuyck starts, health updates and pre-game audio.  Click here.

Winnipeg Sun:  Hellebuyck rewarded with second start.  Not a surprise that coach Maurice is going back with his goalie from Michigan after his performance in Alberta.

The Athletic:  Risk, reward and the Dustin Byfuglien question.  (Paywall).  As if on cue I guess it is a good time for an article about Dustin Byfuglien and the pros and cons that arise from his game.

NHLPA:  The 5 toughest players Mark Scheifele has ever faced.  Interesting article from the Jets centre on the players he finds the most difficult to play against and why specifically. 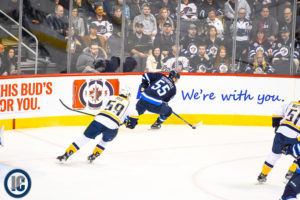 TSN 1290 Winnipeg:  Time-out in Edmonton a time to refocus.  Jets captain Blake Wheeler joined the Afternoon Ride to discuss the 1-2-0 start to the season, what the team learned in the tough times early in the season, and how the time-out taken early in their game in Edmonton helped the team go on to beat the Oilers.

TSN 1290 Winnipeg:  Byfuglien’s status still nagging, day-to-day.  TSN Hockey Insider Darren Dreger joined the Afternoon Ride to discuss the mystery surrounding Dustin Byfuglien’s status after being out of the Winnipeg Jets lineup on Monday. Dreger says his latest information has Byfuglien out day-to-day with an injury. Dreger also discusses how Connor Hellebuyck could be used through the season.

TSN 1290 Winnipeg:  Scheifele’s confidence shows in his play.  Jets on TSN analyst Kevin Sawyer spoke with Kevin Olszewski about the Jets first three games of the year, their play in the win vs. Edmonton and what the Jets need to do to remain successful this season.

Winnipeg Free Press:  Coach skips first game for son’s NHL debut.  (Paywall).  I suspect he is happy he skipped the game (with the organization’s blessing) as his 1st round pick son scored in his NHL debut.

Winnipeg Free Press:  Moose finding offence this season.  Lots of scoring available from this group, especially as guys like Kyle Connor and Jack Roslovic continue to find their game.